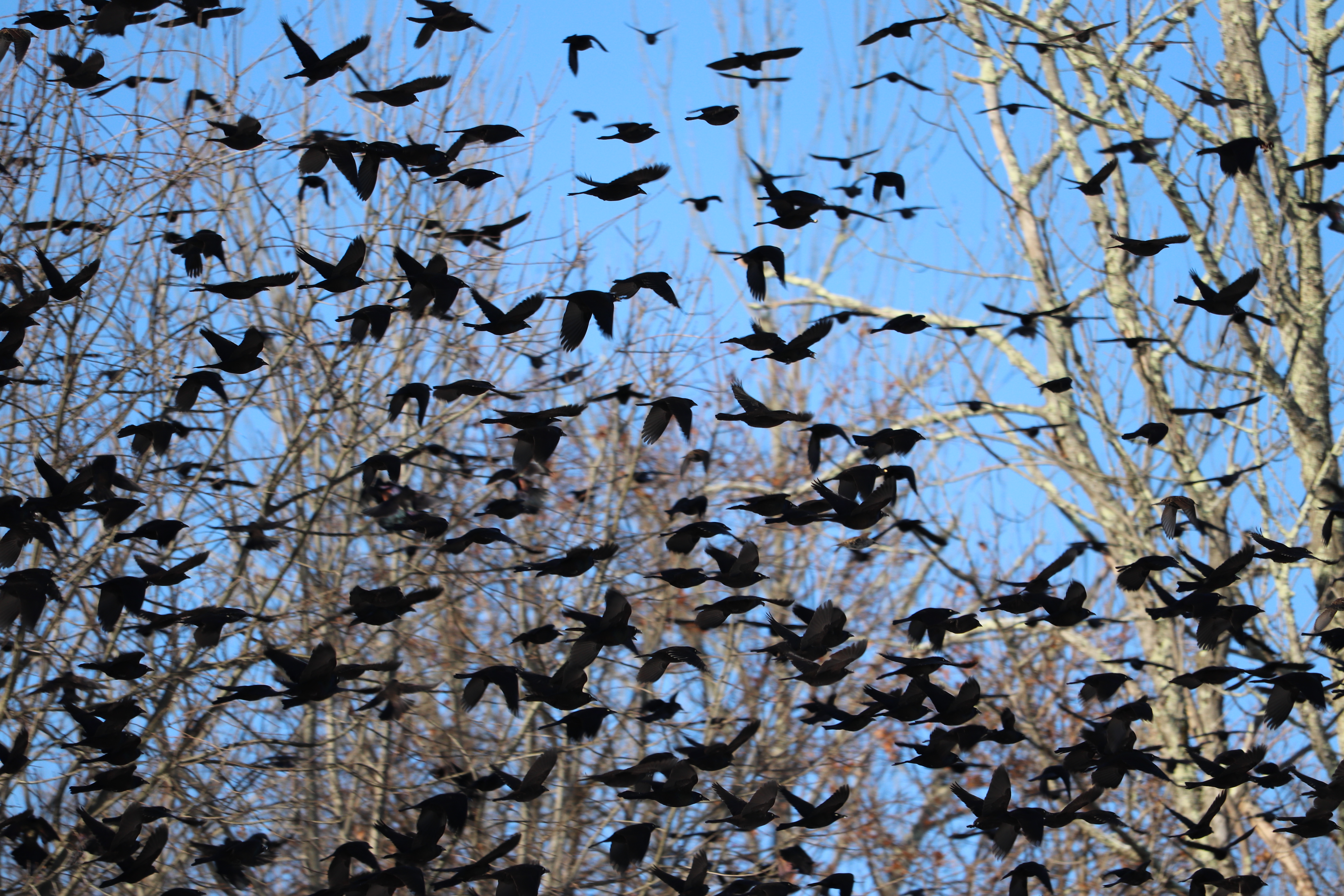 Typically when I walk along the empty fairways of the golf course near my home, I often come across a flock of geese waddling around, but pretty soon they take flight. The whistling of their wings and honking of their guttural alerts… and the quiet of the almost-winter air is broken.

Yesterday, I was able to witness a different kind of broken silence. Something I had recently seen in a beautiful video, I witnessed on a much much smaller scale right in my own backyard meadow.

It was late morning and I was busy going about my daily routine and I began to hear a series of distant whistles and trills. If closed my eyes, it almost sounded like shore birds. But I soon realized that my backyard was a sea of gregarious black dots. Covering every inch of the landscape from snowy ground to canopy of trees. The birds were everywhere. By the time I donned my waterproof boots and grabbed my camera, they had already shifted their presence to another quadrant of my property. Real bird busy-bodies. Some were behind a giant Pin Oak, and some were scattered below a berm on the far side of our meadow. So much noise was coming from them in fact, that I could barely hear the crunch of the snow beneath my feet.

Knowing that they could take flight at any given moment, I really should have had my camera more ready than I did. But their whistles and clicks and downright noisy chatter continued, but in an instant, like someone pushed the button on the race starter at an Olympic swimming pool, the birds took off in unison. They settled down briefly on a nearby Sycamore laced in white bark, but just as suddenly took off again. 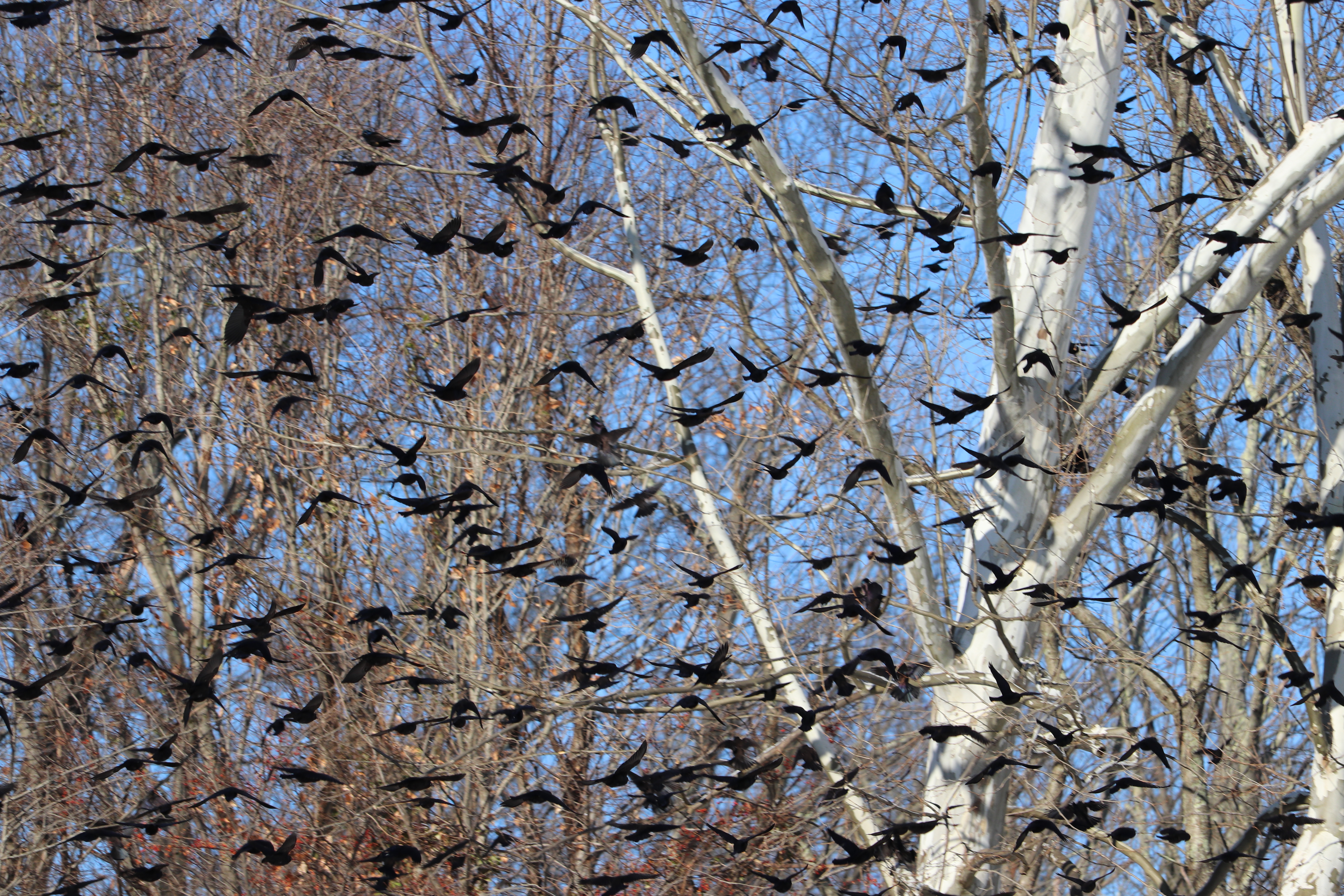 What struck me though, was not the shear number of birds, but how as if by the flick of a switch these birds went from a noisy cacophony of warbling and chatter to silence. It was as if all I heard was the wind in their wings. So when they fly, they silence themselves, but perching or foraging on the ground, they can be heard from hundreds of feet away. Once the birds flew away beyond the reach of my lens, I walked back inside the house and questioned why would a bird that travels through our meadow here in New Jersey be called a European Starling. Clearly, they are not native, right?

After monitoring kestrel boxes over the summer we began to dislike these birds because of their desire to overtake the nesting spots of native species (like the kestrel or Eastern Blue Bird for example.) So I wondered, where did they come from then? The answer surprised me. In the year 1890, 100 European Starlings were released into Central Park by a certain society. I skimmed up and down the article in a mad hurry and I didn’t get the whole story, but it was something to do with the plays of William Shakespeare and there were other birds involved. Then I bookmarked that for another days’ read.

The more I read about these nest-stealing and egg eating birds…I must say I was actually impressed by them. They are mimics, clever, adaptable, and obviously doing very well for themselves since 1890 thanks to their tenacity. Later that same day, I saw the birds again. This time in my neighbors’ yard. Chances are, next time I am on the golf course I might get to see them again.

The more I researched this article as I wrote it, the more I began to question my bird-nerding. What if the flock I saw was the Common Grackle? It’s highly possible. In fact, it’s true. Once I downloaded the images off the camera, which conveniently was AFTER I wrote this blog post I realized my mistake: Starlings have a yellow bill, Grackles have a black bill and yellow eyes. But regardless of what species birds that broke the silence of the snow this cold December day, I am glad they did. I now know a tiny little factoid about Central Park, and I have a greater appreciation for the fanciest aerial display possible in prey vs predator (do watch the video linked below). Plus I can add the word murmuration to my daily birding vernacular right along side twitterpated.

And even I, the learned bird nerd can make an improper ID on the fly.

I watched a film forwarded to me by my husband by Nick Dunlop that won the Video Category in the 2017 Nature’s Best — Windland Smith Photography and Video Contest and was also played in the Smithsonian Museum of Natural History. The film is titled The Starling and Falcon Dance. It’s worth a watch, if not two or three. It’s a captivating visual and almost meditative look at the way a peregrine falcon and a murmuration of European Starlings grace the sky with breathtaking displays. Before you watch the video though, be sure to look up murmuration. 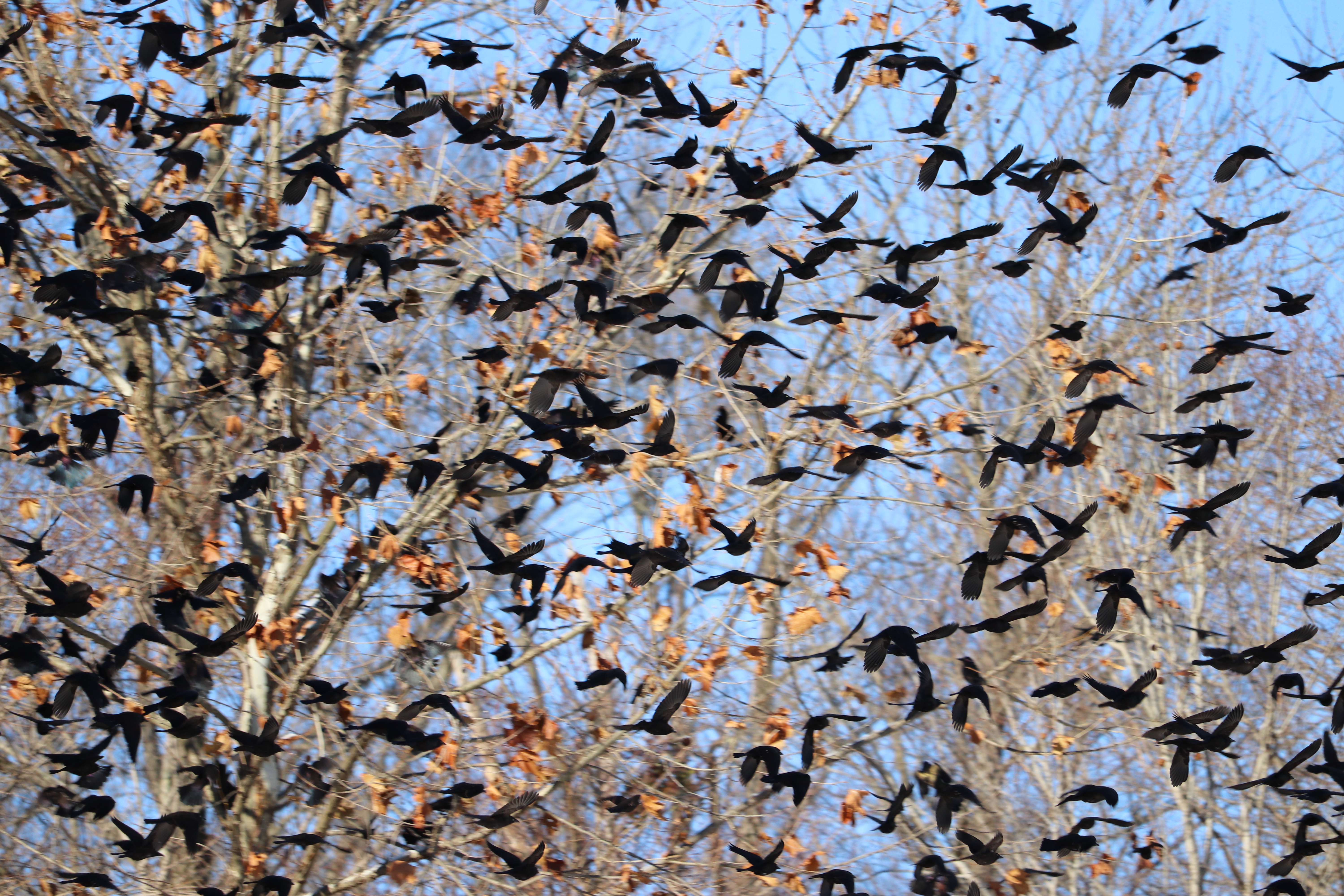