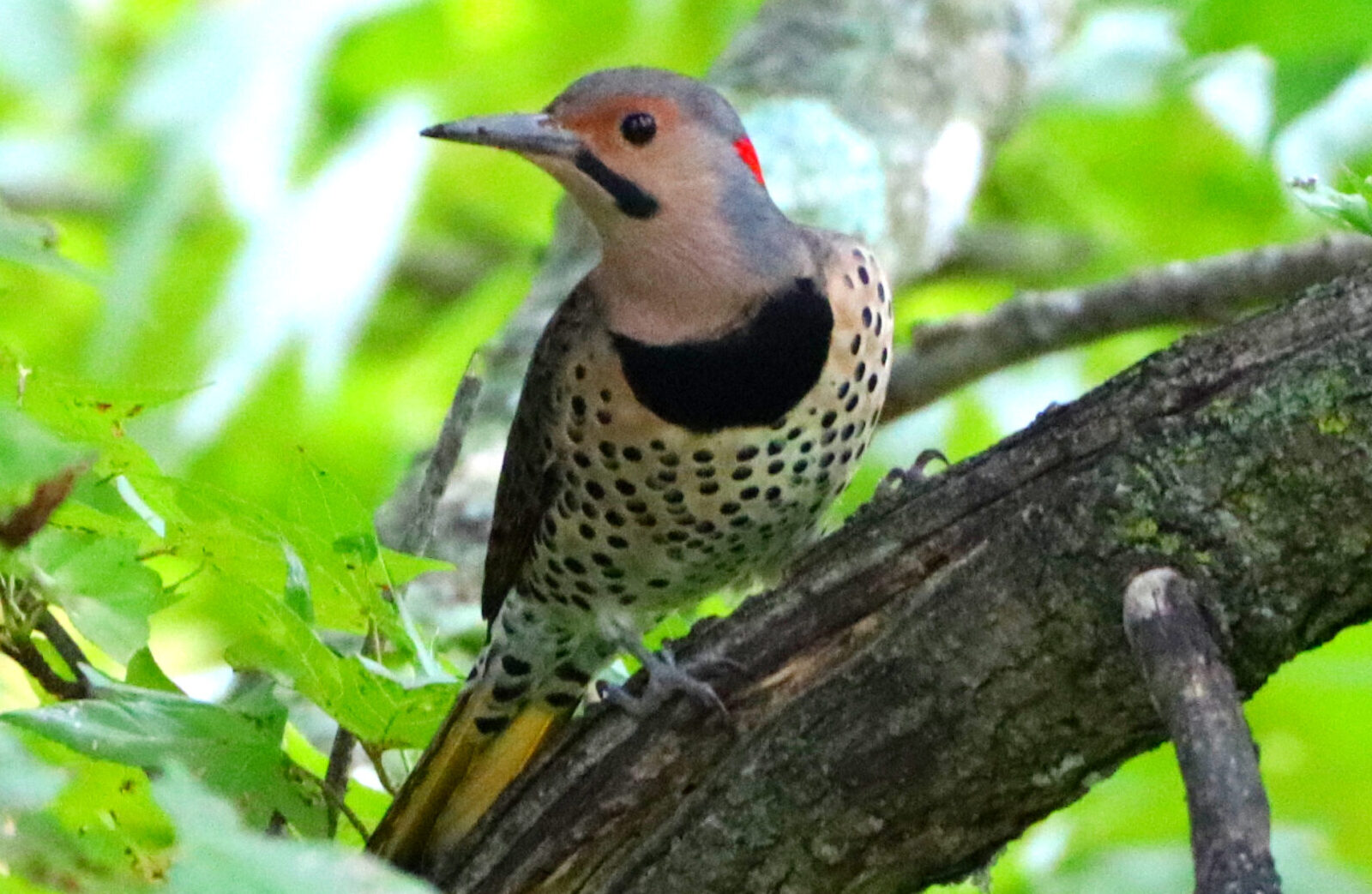 The Housing Market is Hot!

A lot of things I learn about birds continue to surprise me; almost daily I learn something new. 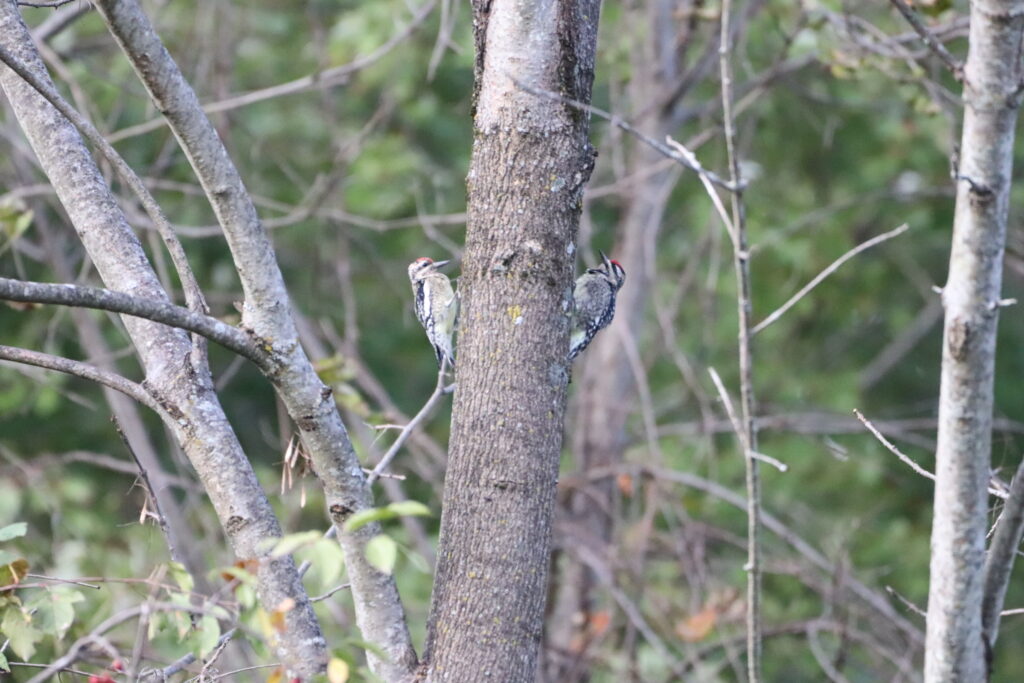 I spotted a pair of Yellow-bellied Sapsuckers, freshly returned from their northern summer home. The number of Chickadees seemed larger than normal. Then there was a number of Northern Flickers (yellow-shafted) flying around our shed. One seemed to be checking in on the flower boxes for some ants, their favorite food. And then…there it was, a mysterious activity of Eastern Bluebirds and a lone Flicker checking out a nest box. At least I thought it was alone until I looked at the pictures. There was a male and female Flicker. Was there an open house?

Could they be checking it out for a potential winter roost? Could they be scouting areas for next season’s breeding territory? It was as interesting to speculate as it was to watch them moving about the nearby branches around the nest box.

The Northern Flicker (Coleptes auratus) is a gorgeous woodpecker, and the “yellow-shafted” of the Eastern US has these flashy wings that appear a yellow hue in flight. (Auratus being the Latin word for “gold” or “golden”). Up close, these wings are indeed unique. In the West, the Northern Flicker is called “red-shafted” as their wings are more on the reddish side and they have a slight variation in their facial markings. But all have the tell-tale black crescent-shaped bib just under their throat regardless of which area. They are often spotted on the ground foraging for insects, unlike most woodpeckers you find in tree tops. 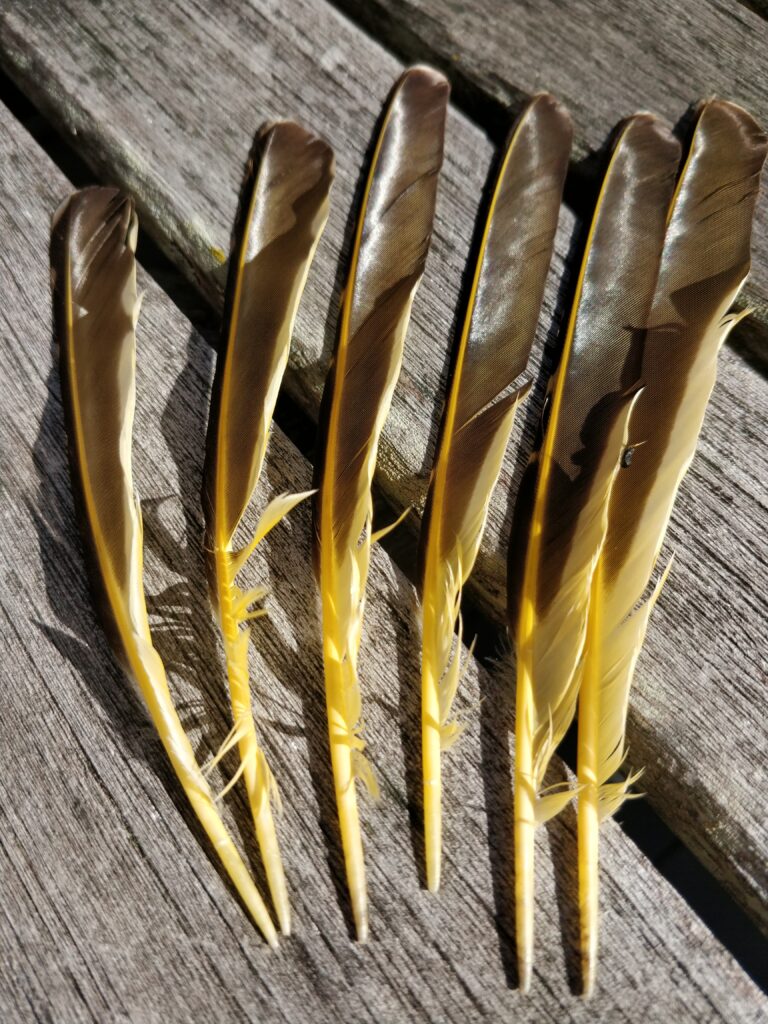 Sometimes the easiest way to spot a Flicker is by their undulating flight pattern, and their telltale white rump. It’s as white as a bunny’s tail. I found these feathers some time ago in my yard and it took me some time to ID them as belonging to a poor fallen Flicker. 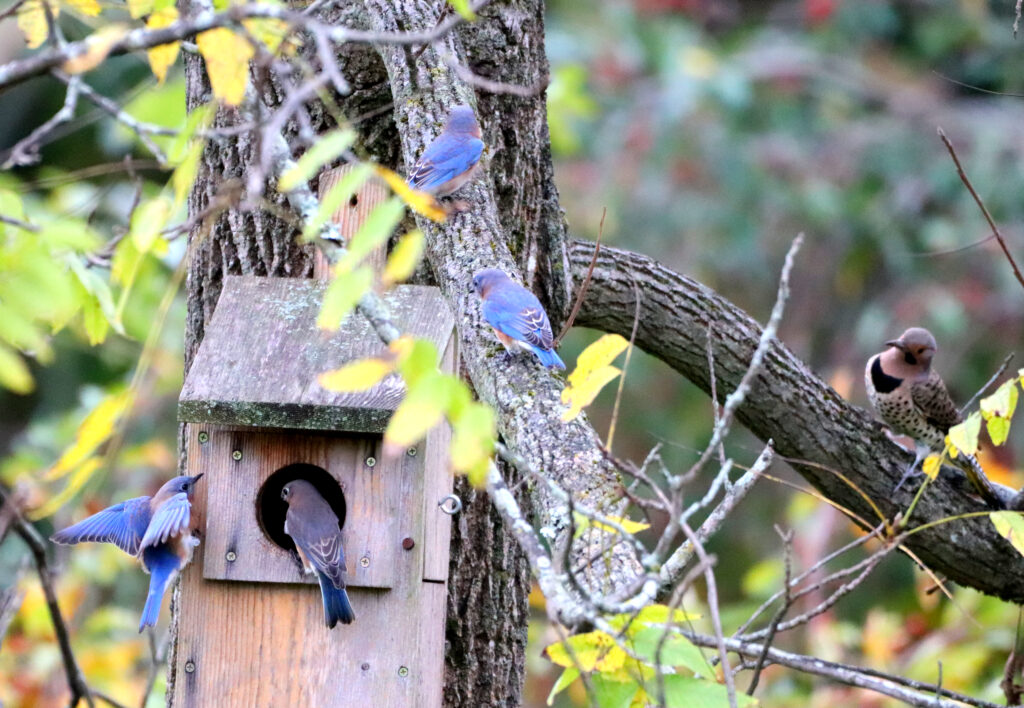 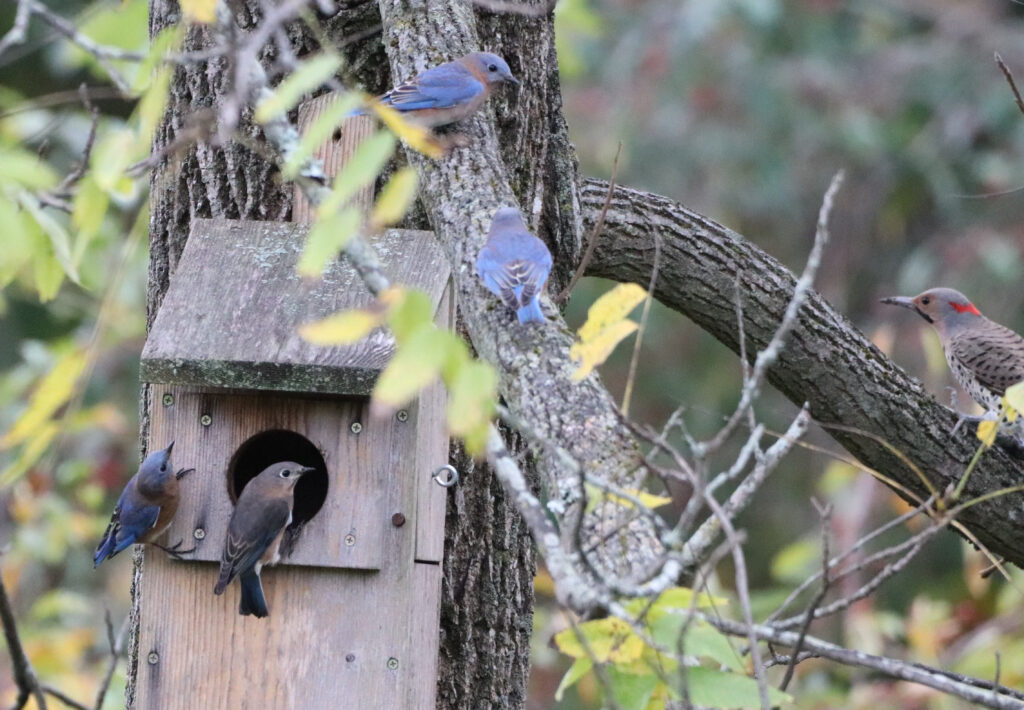 They didn’t appear to be fighting. It almost appeared to me to be an innocent game of hide and seek. There was about a half dozen of bluebirds, and two Flickers. The males have the black “whisker” coming down from their beak, while the females have no black next to the beak. Birds are a mystery. Though this male Eastern Bluebird (below) did seem a bit annoyed. 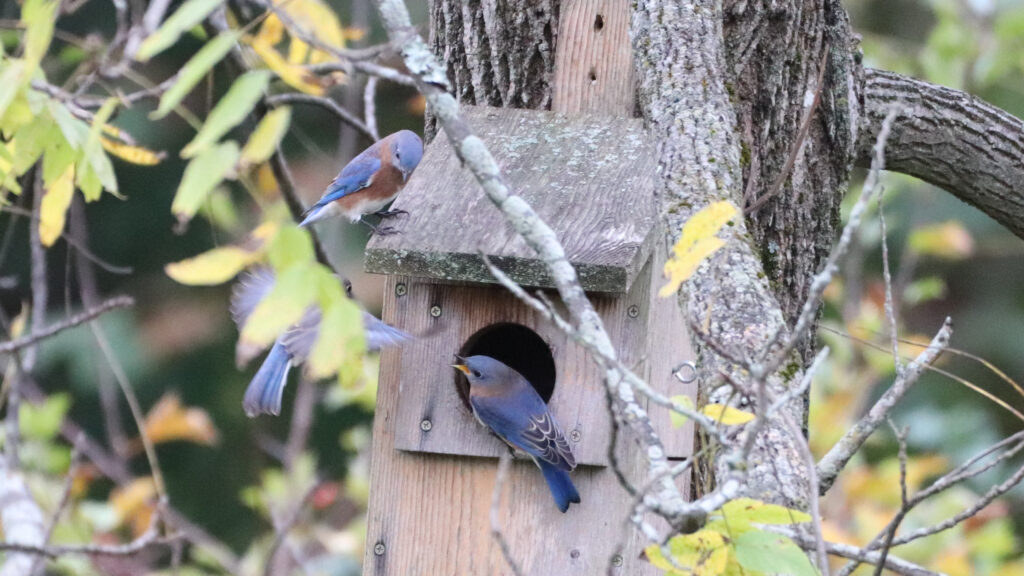 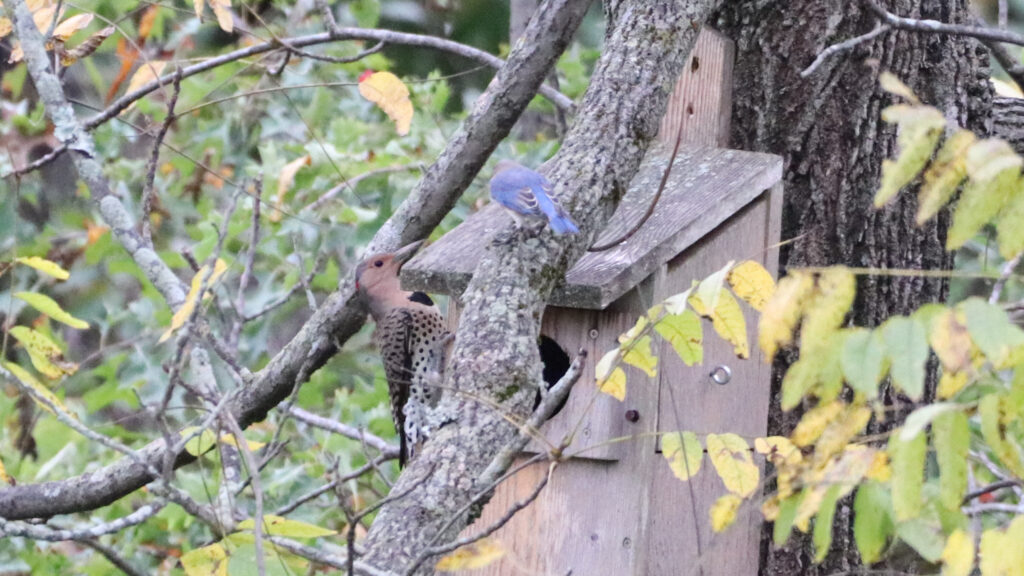 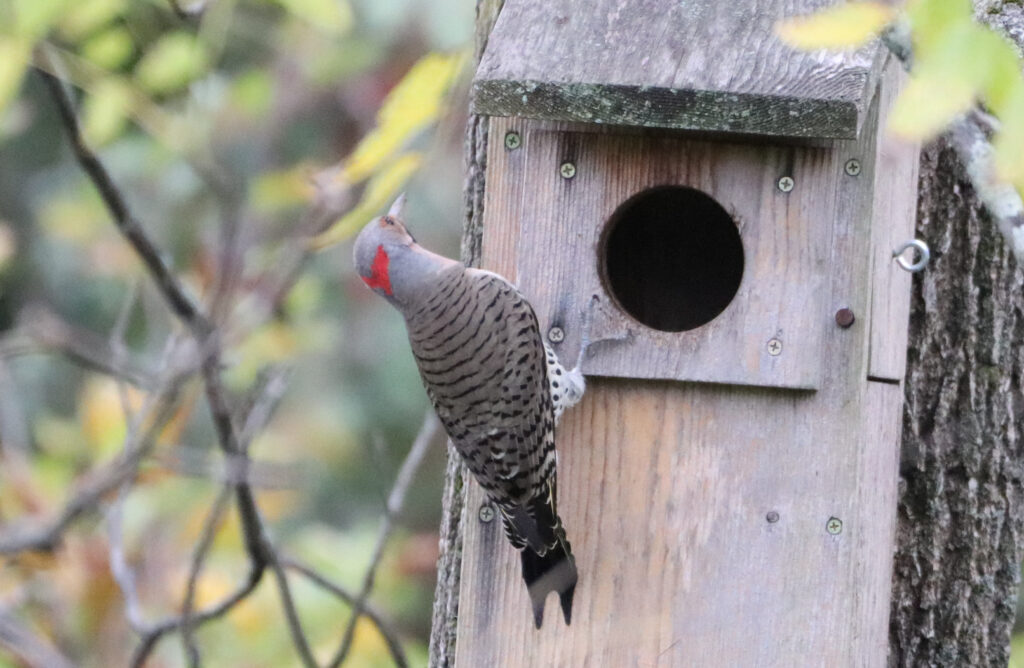 I am not sure who made the offer that was accepted. But early morning bird activity at Flutter By Meadows is certainly interesting. Seeing a bird going into a nest box when breeding season ins’t for another couple of months is certainly an interesting sight! I am pretty certain that the Bluebirds won’t nest here come spring, as the opening to the nest box is much too large. But we have found a bluebird before in a box of this size. It’s a buyer’s market these days! 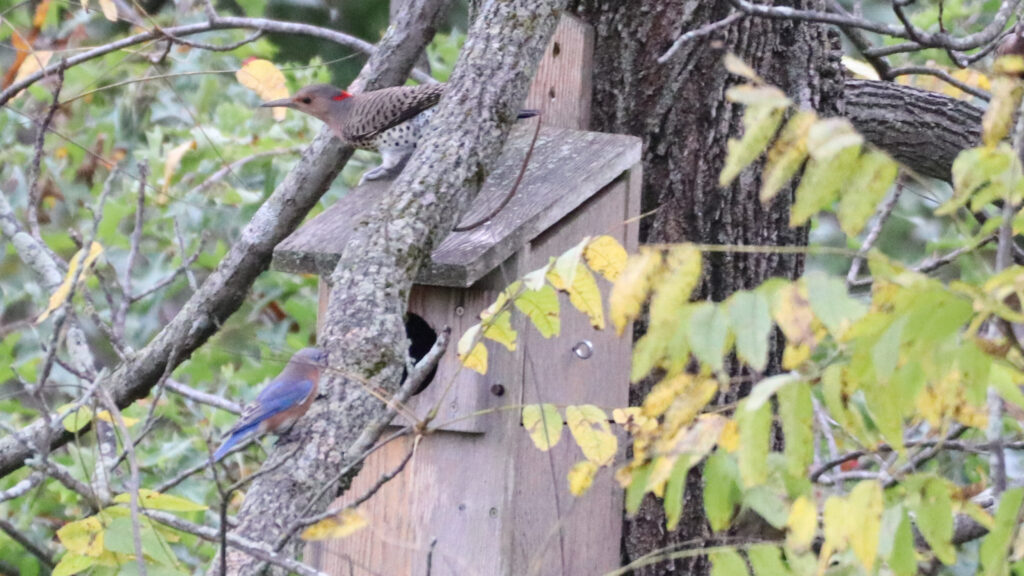 One thought on “The Housing Market is Hot!”