She flies from the east end to the west end of our own little #HomegrownNationalPark exhibiting endless grace.

The snow was falling, and there were more birds at our feeders than on any other day. At one point,  four male Northern cardinals and four females. That may be a record for us. Watching birds during the pandemic has had nothing but positive effects on me during unprecedented time, now almost a year in.

It began much like any other morning in our house, except for the fact that it was a snow day, nothing was much different than any other regular Thursday. My kitchen window looks out at an approximately 1 acre wildflower meadow. We often see a red-tailed hawk hunting high above looking for prey from a very tall Sycamore while we make our morning coffee. This morning, though something was new.

Seemingly out of nowhere, there was a hawk very close to my kitchen window sitting on a low branch, only about 15 feet from our windows. I dropped the dishes I was washing as grabbed my camera. I was almost 100% positive that it was not a red-tailed hawk because they never come this close. Nor do they EVER let me get close. I can be 150 yards away from a red-tailed hawk and they fly away. This one was different. But no doubt equally stunning. Hawks are fascinating to me. 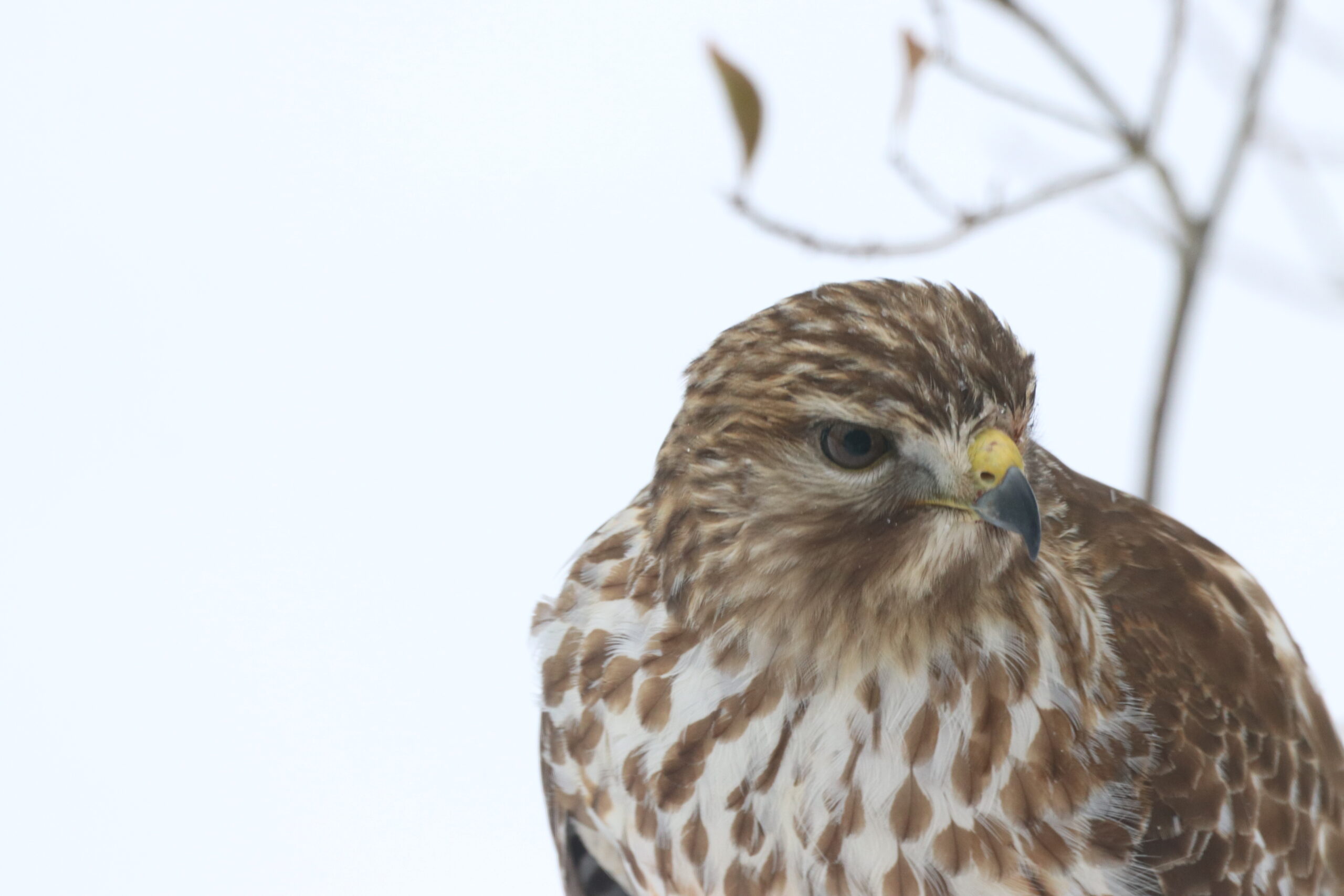 The bird later flew to the front yard at which point I opened the front door as slowly as I could and snapped away for another photo. Still, this bird did not fly away when the door opened. I decided well, at this point, if I don’t try to get a closer shot, I will never get one. Thankfully, my house slippers are shin-high boots, so I proceeded to step outside softly in the falling snow, in my slippers, a thin puffer jacket which I happened to have on, and no hat. It was 27 degrees and snowing. Still, the bird did not seem phased by me. And still, at this point I didn’t know for sure what type of hawk it was. When I came back inside, my daughter asked: “Why are you covered in snow?” 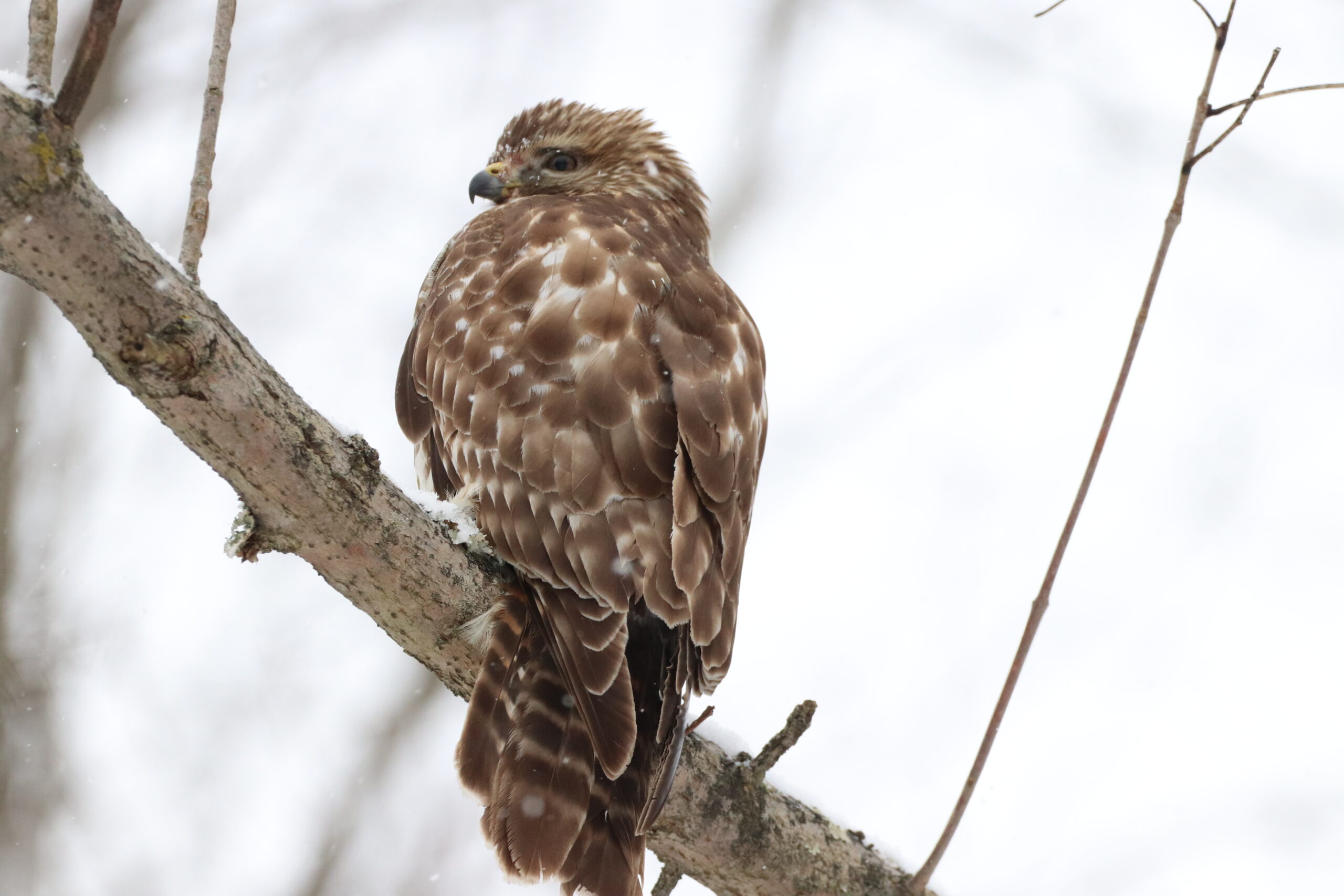 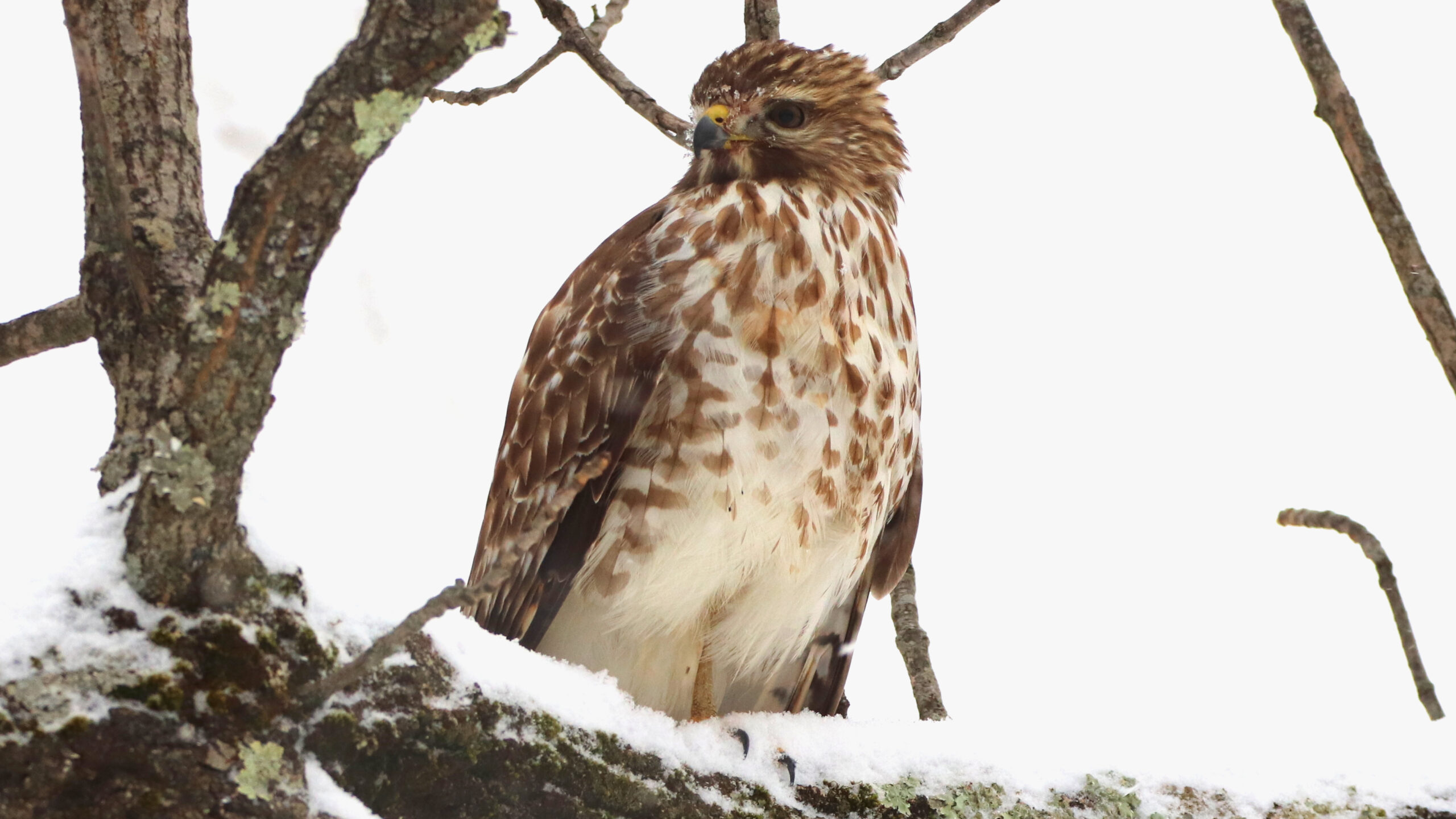 It wasn’t until I saw the bird fly off and caught a glimpse of his white wing bars in flight that I realized it was a red-shouldered hawk, and a juvenile one at that. If you look really closely at the photo above, you can just barely see a few of the feathers on the chest taking on a tinge of rusty red. When this bird loses his juvenile plumage, the chest will be a deep reddish brown and white barring.

This went on for quite some time…me running around on tip toes to the windows of my house, upstairs and down, front windows and back windows, and occasionally going back outside (this time with proper gear) to catch the bird in flight, or perching or wagging his tail feathers. I was truly enjoying the time I would see her fly from tree to tree looking for voles. In a desperate attempt, she even once landed on one of our feeders. She looked like she was riding a swing. It was pretty funny.

Later on, she was perched on a tree just outside my window upstairs and I actually took this picture (below) from through my window. It was like arm-chair birding at its best! And doesn’t it look like she is smiling? 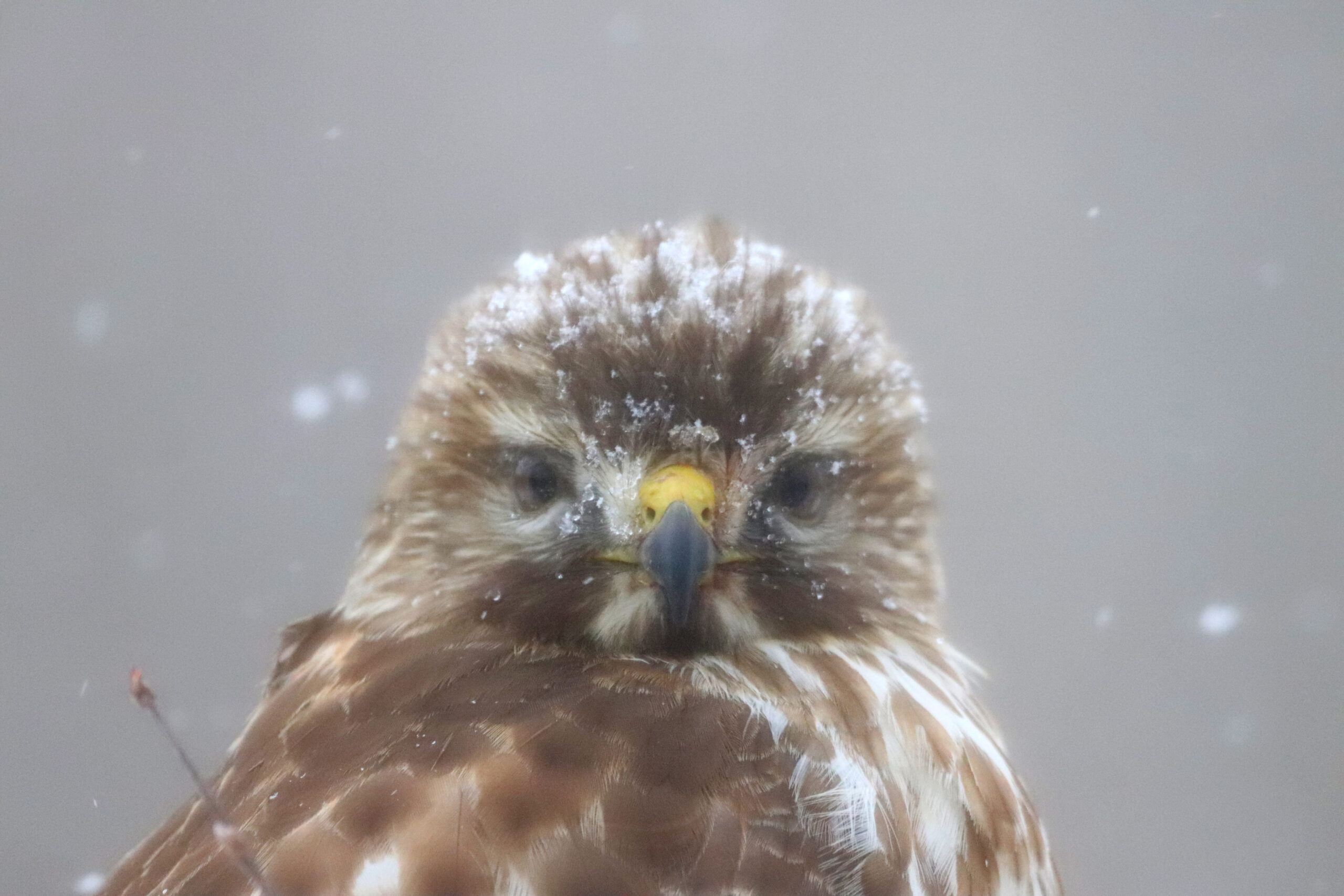 I was delighted to catch a shot of her in flight, which is still a work in progress for me…as I have only been photographing birds for a little over two years. But I was feeling discouraged that her hard work was still getting her no lunch. 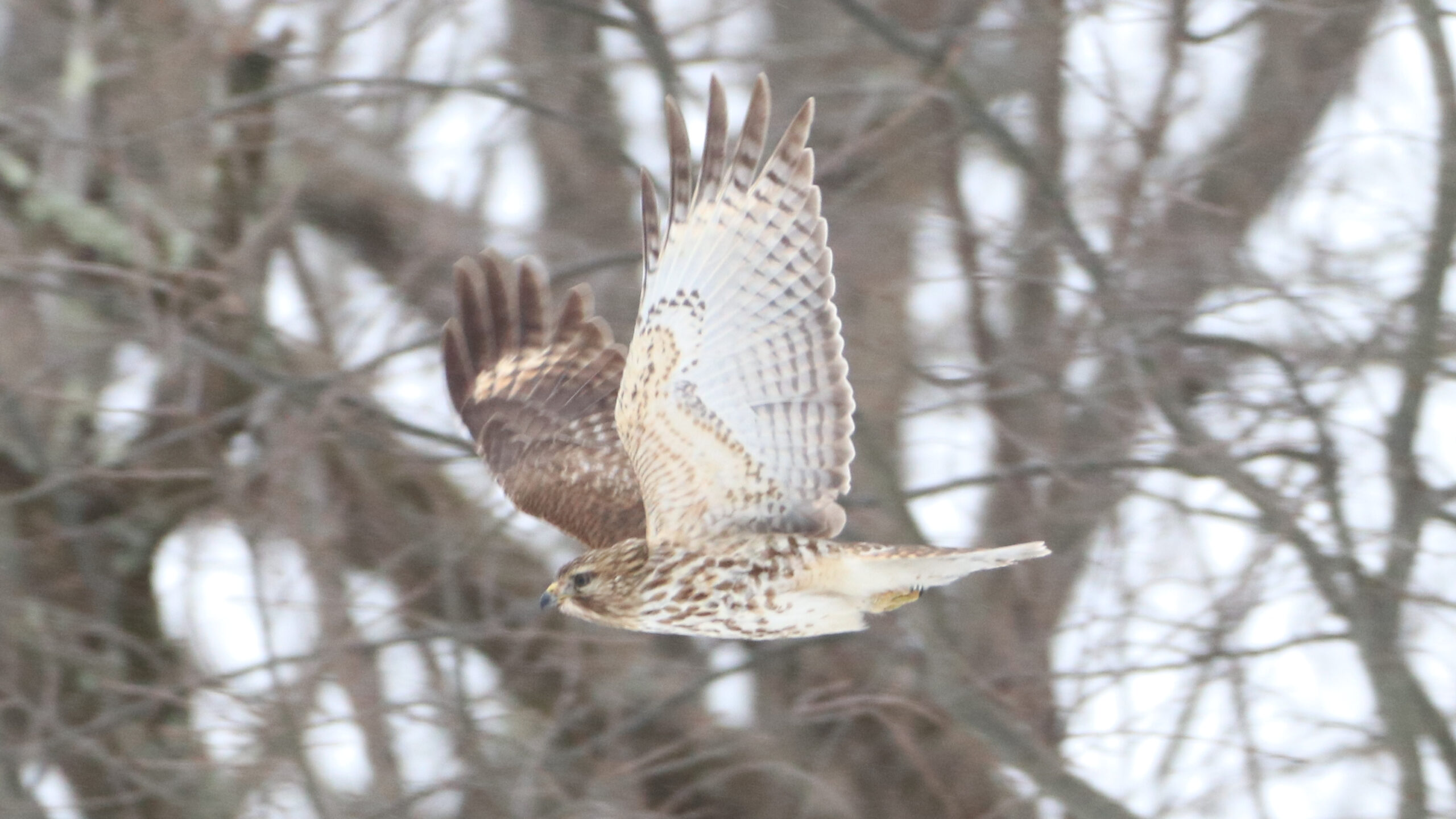 Note the crescent shaped white wing bars on the dorsal side of the tips of her wings. 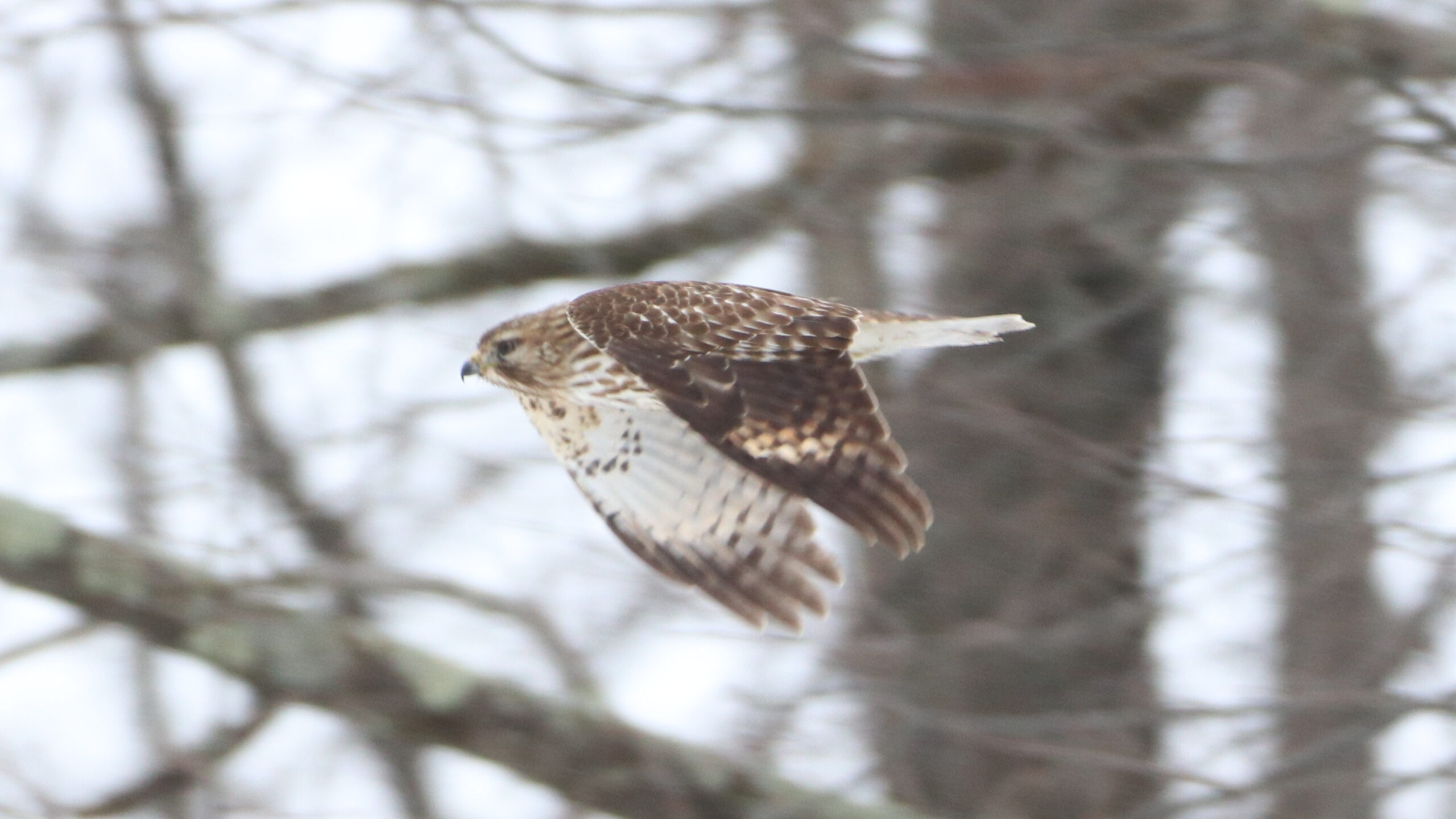 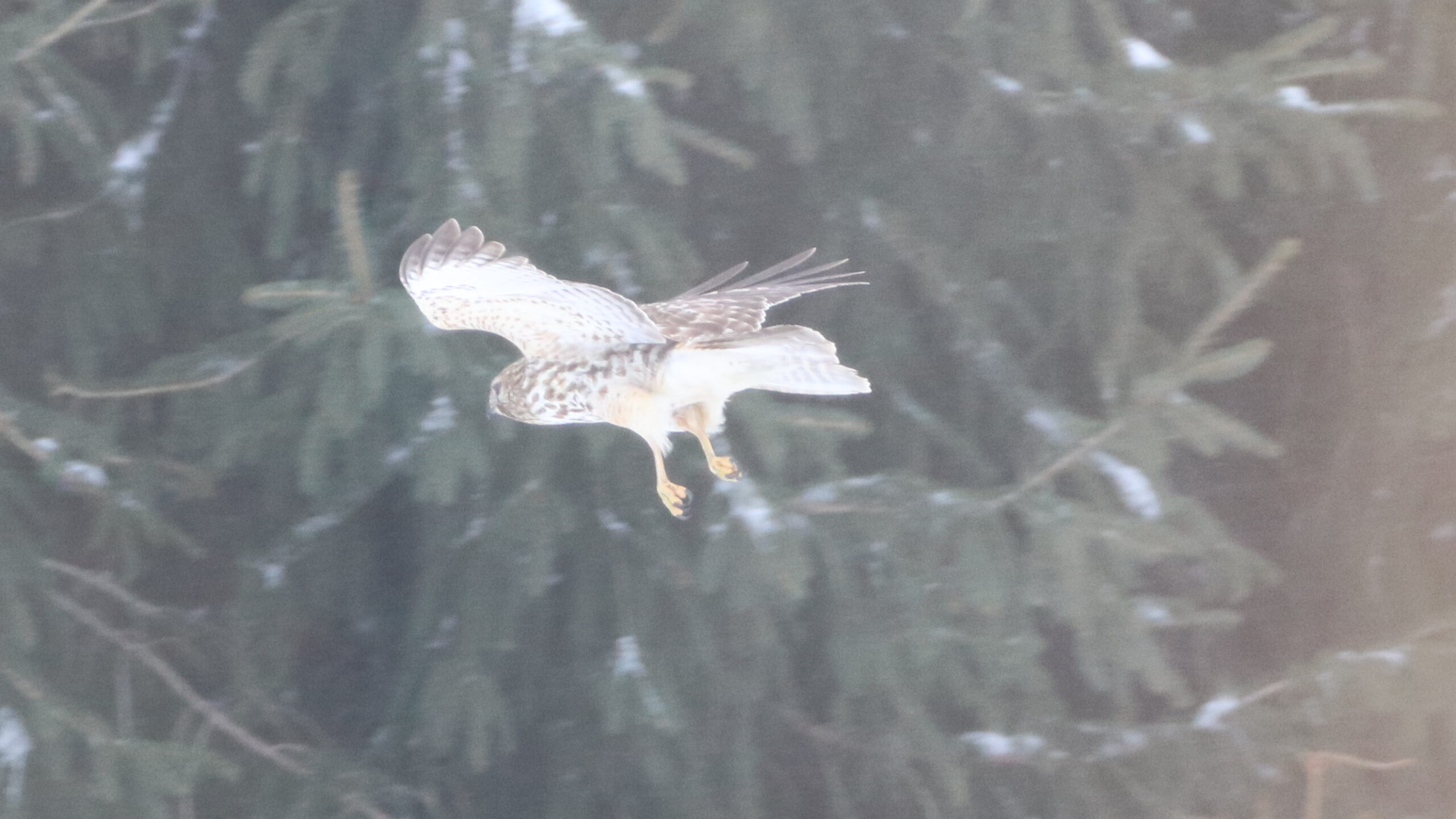 As I was watching this gorgeous bird of prey for a good portion of my day, I was reminded of something I read recently in a book by Douglas Tallamy, Nature’s Best Hope: A New Approach to Conservation That Starts in Your Yard. He says this on page 73:

Close interactions with the wild animals in your yard can bring you the same emotional benefits that are gained from living with cats and dogs.

I guess the reason this stuck with me so is because we share our property with countless wildlife. And for certain, no two days are ever the same. Yesterday, a brown creeper was on one of our trees, a few days ago, a flock of cedar waxwings popped over for a quick visit. We love looking out our windows and seeing life. And on days like today, I can’t help but gain positive feelings from watching nature unfold literally outside my windows. Especially when the elegance is only heightened by the beauty and stillness of the falling snow.

And it is happening more and more ever since we made a few small changes around our property to the tune of native plants. Who would ever have told us that three service berry trees in our front yard would yield so many warblers coming by? And who knew that a low area of cardinal flowers, foam flowers and native grasses would provide coverage for caterpillars and insects that would otherwise be mowed over every week by a heavy piece of machinery? Who knew that a micro meadow would yield so many pollinators on such a small area of land that was otherwise dead grass? Who knew that tree swallows would come to our meadow every spring to breed and raise their young all the way from central and south America?

At my house, we actually live in a National Park. But it’s unique. First, there are no crowds, no waiting lists for camp sites, no entrance fees. Second, our park is our very own, our Homegrown National Park as Doug Tallamy describes it. Third, and probably the best part? We have a lifetime membership.

Doug Tallamy is working so hard to change people’s idea of a beautiful garden. Lines in mowed grass are the lines that are causing destruction to countless wildlife. Birds in decline, pollinators in decline, and whole gamut of biodiversity threatened. Lawns are an ecological dead zone. Yet many homeowner’s pride themselves on how green they can make them, and how leaf-free they can be!

Although we like nature, we have always felt apart from it; humans are here and nature is someplace else. The idea that we could coexist in the same place at the same time has never been part of the vast Western or Asian cultures. –Doug Tallamy

He encourages homeowners to make small changes (that when added up from neighbor to neighbor and town to town and county to county and state to state can really make a difference). It is with his desire for people to plant native and give back habitats that they can “Get on the Map” and make a difference.

If you have a few extra mins of time, I encourage to read the article here where Doug Tallamy talks about gardening for life. Which if we do not as a collective group of people…well, you really don’t want to know. The stats are saddening.

Even worse…we have never been taught how vital biodiversity is for our own well-being. –Doug Tallamy

And if you have even more time, I highly recommend his book. I have read it once, and I plan on reading it twice. It’s that good. Actually, all of his books are very good! 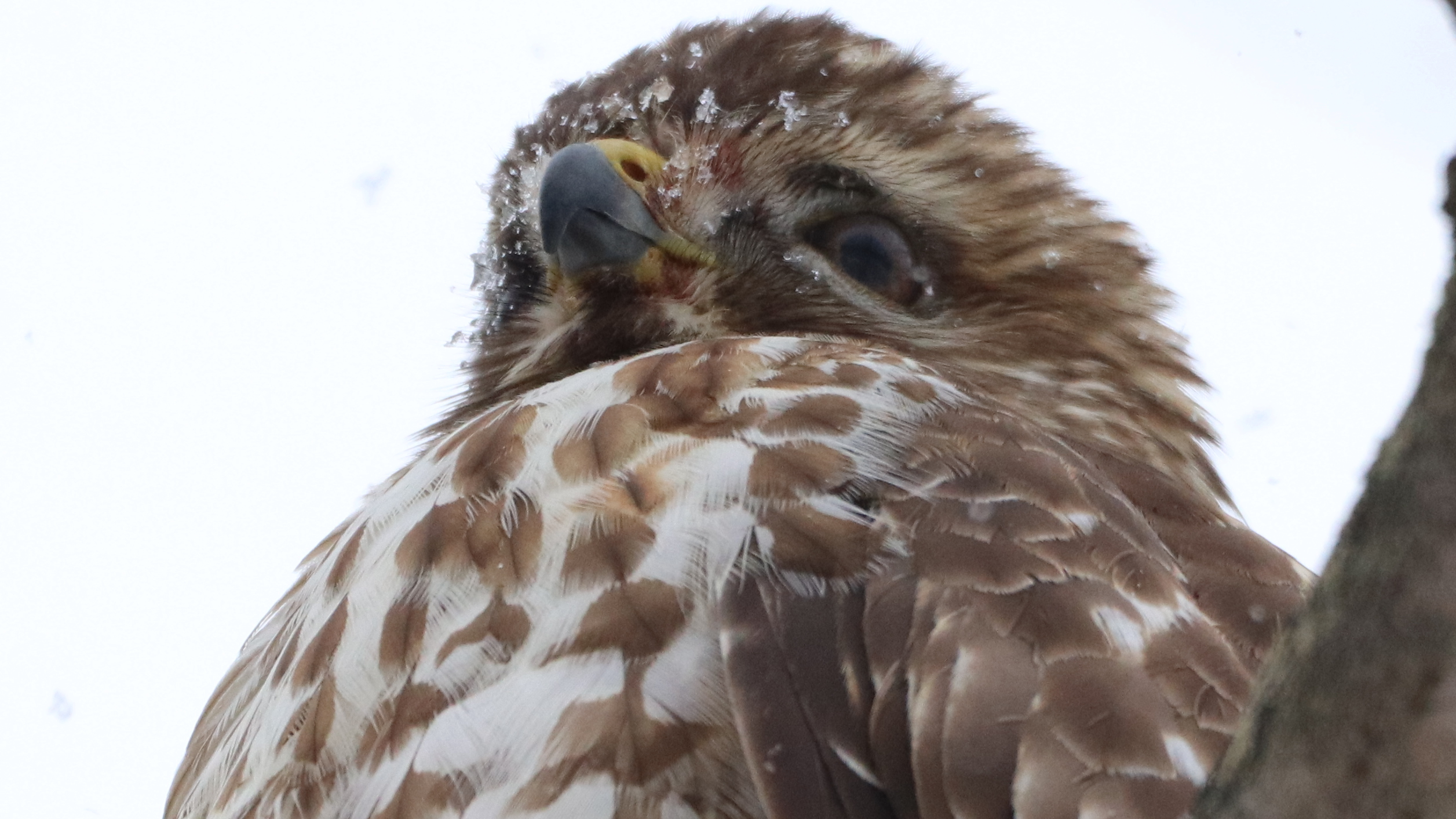 All the while that this escapade went on of her flying around our park from limb to limb in search of prey, I started to feel a little emotional for her. While there was still evidence on her beak feathers of a moderately recent kill, I was hopeful to see her catch something. She was literally working all day to catch a meal.

The least we can do, is protect her habitat. And better yet, provide a meadow for her favorite meals of voles and chipmunks.

And I can continue to photograph her endless grace as she flies from the east end and to the west end of our own little Homegrown National Park.

Author’s note: Every one of these pictures was taken in one day, within 150 yards of my house. 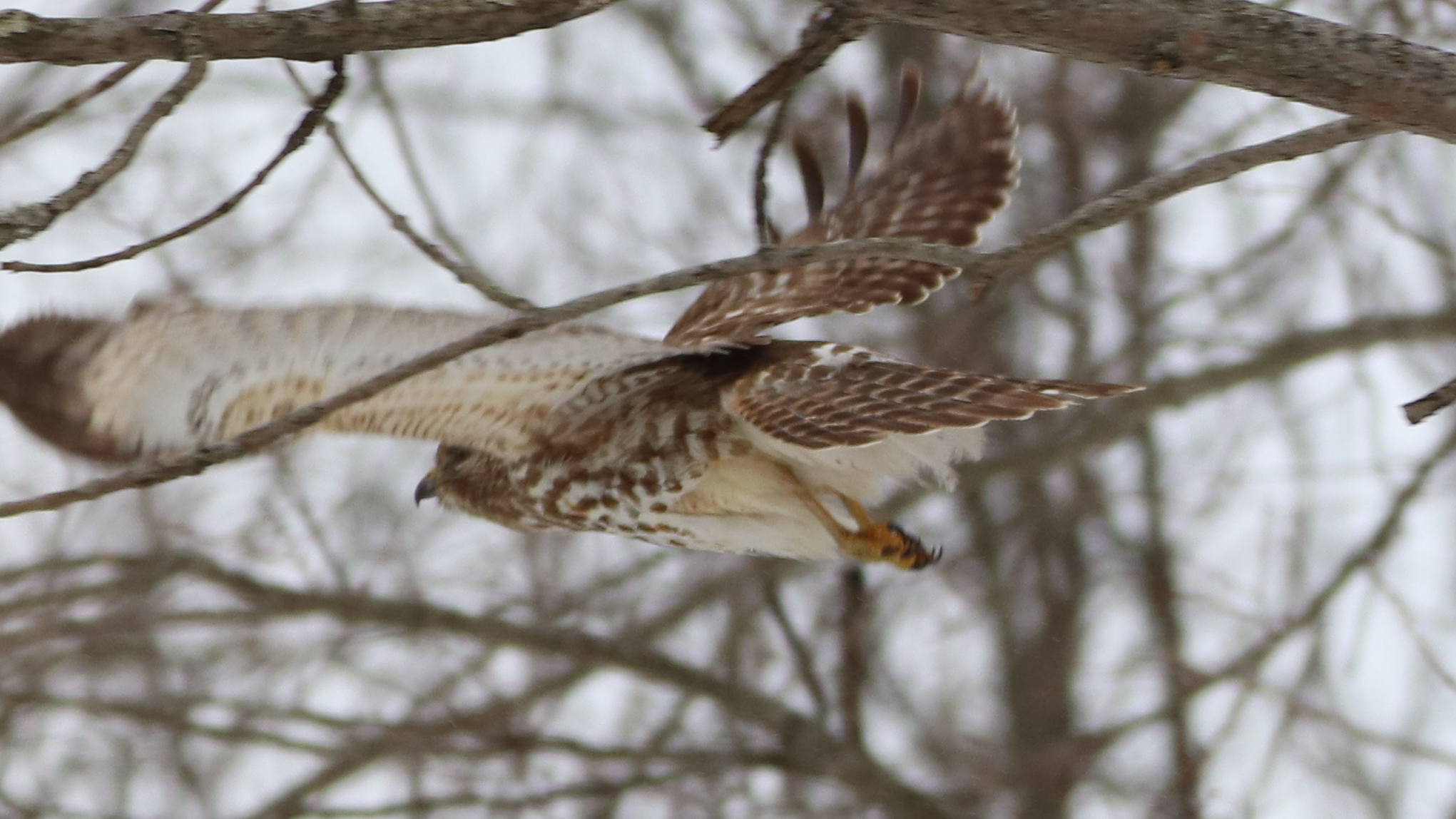 Good luck, girl, I hope you catch something!

One Reply to “A National Park Pass That Never Expires”