On a very sunny Saturday afternoon in summer, my husband decided to take the long way home from a morning out with our then toddler, in the unlikely hope that she may catch a bit of a nap on the longer way home. She was in the adjustment age where they are too smart to know that an afternoon nap is still in the cards for them, but also just too dang exhausted to make it past 4pm without a no-holds barred tantrum. In the process of taking longer, less traveled back roads, my husband happened upon a beautiful wildflower meadow in the middle of nowhere. Struck by it and its unending beautiful swath of color…my husband thought to himself: “I want a backyard like that.” And so, that seed (in his mind) was planted.

He searched and searched and Googled and Googled all the steps required in making a meadow. And the benefits. He soon realized that the dream could become a reality. It wasn’t long before our boring, mowed detention basin would soon bring new life (and more ecological benefits) to our backyard.

The existing property as seen above is our detention basin for the homeowners’ association of our small development of about 8 homes. All told, it is just over an acre and is flanked on one side by the CSX railroad. The grass was never green in the summer, and the area was further marred by the giant concrete ditches which funnel towards a large barricaded drainage hole. In a nutshell, it was an eye sore in all directions. Yet, with some careful planning and some helpful guidance from a friend, and the “okay” from our township which required special approval for the conversion, we now are able to enjoy something much more beautiful. We now see this: 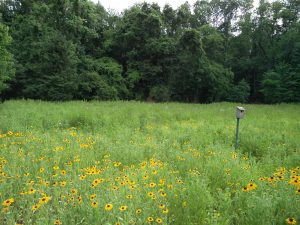 The benefits of our meadow installation involved monetary savings as well. Instead of the basin needing mowing by the homeowner’s association every other week in the growing season from April – August, this meadow only gets cut once a year. Usually in very late fall, early winter. More on the details of that on another post. Want to know what a habitat island is?? Then don’t miss that post, more to come!

So, with the installation of the meadow, we saw the first year it “Sleeps” and the second year it “Creeps” and then the third year it “Leaps”. And now it continues to evolve and grow.  The first year is slow above ground because so much is taking hold below ground as a meadow develops a deep root system. As such, so did the wildlife grow around our few acres of property. We already had a lot of birds. Now we have a resident owl named “Hoots” and tons and tons of butterflies all summer and into October. Every time we seemed to be outside, something was either flying by or soaring or cooing or flitting about. So, our house is now aptly-named Flutter By Meadows. We love it. It’s like a crazy menagerie of things with wings. Punctuated by the occasional fox, turtle, and yes, even a salamander. Check out the post: http://flutterbymeadows.com/2018/03/17/what-does-the-woodcock-say/

From there, things took off. Literally. We added another meadow a few years later. A rain garden. A white pine grove, and countless native shrubs and plants. We were even featured on a garden tour and also won a River-Friendly resident award.

So what’s wrong with plain grass though, you may ask. Well, for starters, it’s an ecologic dead zone. Some call it green concrete. Save for a few grasshoppers maybe. More importantly though it what’s under the grass. The roots are hardly anything at all. So when it rains and pours in crazy storms, the water has no where to go. Whereas, a wildflower and meadow grasses root system is nearly as deep as the flowers are tall!! So the water can seep deep into the ground and filtrate much better preventing standing water, pools, and floods. Deep roots also help aid against erosion. Plus, because they reach much deeper, they are better able to reach nutrients to keep them going in hot, dry summers. In very heavy rainstorms, the detention basin would fill like a pool and stay like that for several hours. Filled with murky, ugly brown water until the culverts would drain and the water would eventually make its way out to the local brook nearby. But it was unsightly, to look out my kitchen window and see standing muck water. Now…after heavy rain there is only water in the concrete ditches as the roots of the meadow are able to tolerate the downpours. Instead, we play in the water that is hidden behind grasses and flowers that are over our heads. 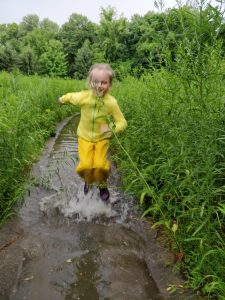 So, that’s how Flutter By Meadows got its name!