It was a crisp fall morning and the sun was casting shadows. Autumn was finally settling in and the leaves were transforming into their spectacular show of color. And with that, from a birding standpoint, comes the fall migration of birds from up North making their way down to warmer areas for the coming winter. Snowbirds, but in avian form.

I was in the midst of writing something on my blog and from the second floor I heard the unmistakable sound of a crash. The crash of a bird hitting the large-paned picture window above our front door. I stopped typing immediately, and sank my chin down to my chest. And I yelled downstairs (knowing full well what the answer was going to be) “WHAT was that??!”

Not even willing to wait for my family to answer, I raced out down the hall and made my way to the front door. And just as my gut instinct had prepared me for, I was faced with the worst scene on my front stoop. I stared through the window of my front door at the upturned belly of a bird that had struck our foyer windows, and then proceeded to fall a good 14 or so feet to our landing. The gut feeling I had inside my body was akin to what was happening to this bird on my front door step. Perfect tiny talons on an upturned bird with beautiful black and white polka dot plumage were interrupted with spurts of blood spewing out of the beak like a tiny red fountain. Inside my own body, my gut was doing cartwheels and my hand immediately went to my mouth to help shield my emotions from coming up and out.

This bird was dead. No doubt. The crashing sound, the height at which it fell, and now this? We almost didn’t open the door because we didn’t want the story to continue any further.

But because it is within us to not sit there and do nothing, we felt the need to help it. At the very least, put the bird at ease in its final moments.

We opened the door to discover the worst possible outcome: a listless bird and a small area of blood near its head.

As if he had done it a hundred times before, my husband proceeded to turn over the bird so it was no longer lying on its back, choking on its own blood and stroked its back and rump to give it a moment of solace. A brief, fleeting moment, as we were all stunned and saddened to see that our giant window above our front door had cast a shadow in such a way that caused this bird to temporarily choose the wrong way in which to fly. Stupid windows was all that I could think about.

We had to be careful with what we did next as our young daughter was watching the whole thing.

Meanwhile, we were still unsure exactly what bird we were dealing with. It was about the size of a Red-bellied Woodpecker but it lacked the tell tale colors of one that we see all the time in our yard. Was it a Downy Woodpecker? No, it was larger. Hmm, we thought, this bird was different. We were eventually able to pinpoint the species as a Yellow-bellied Sapsucker. A juvenile male, based on the marking on its head and throat. A bird that we had seen before around our area, but only a handful of times. 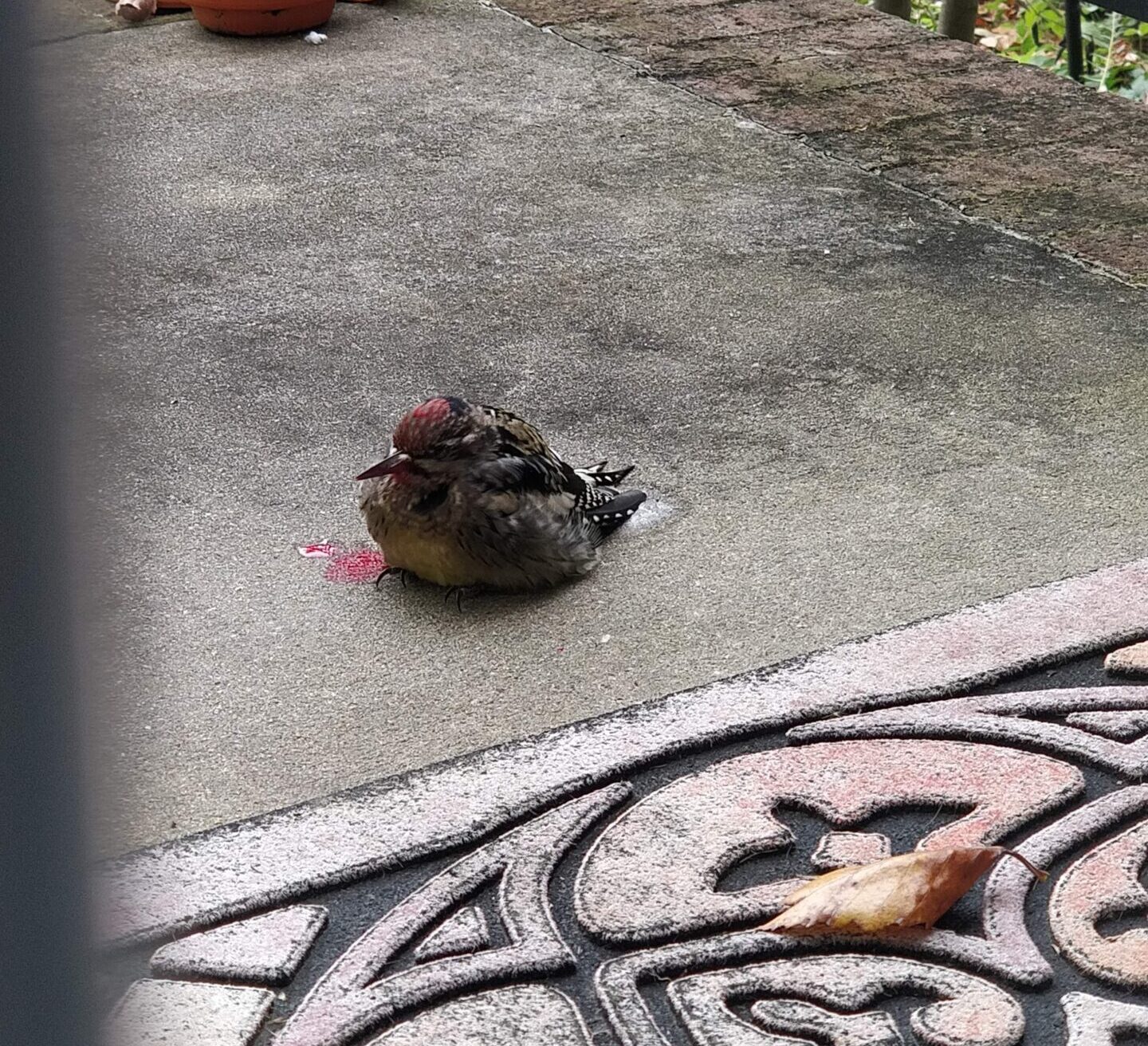 The bird was showing a small sign of life and improvement. At one point it ruffled its wing feathers as if to plump up and get ready for flight. At another point, it pooped. Another time, it shook its head from side to side like a cat trying to get water off of its ears. Hopeful that the bird might now have a chance at survival, we phoned the Mercer County Wildlife Center and described the situation. 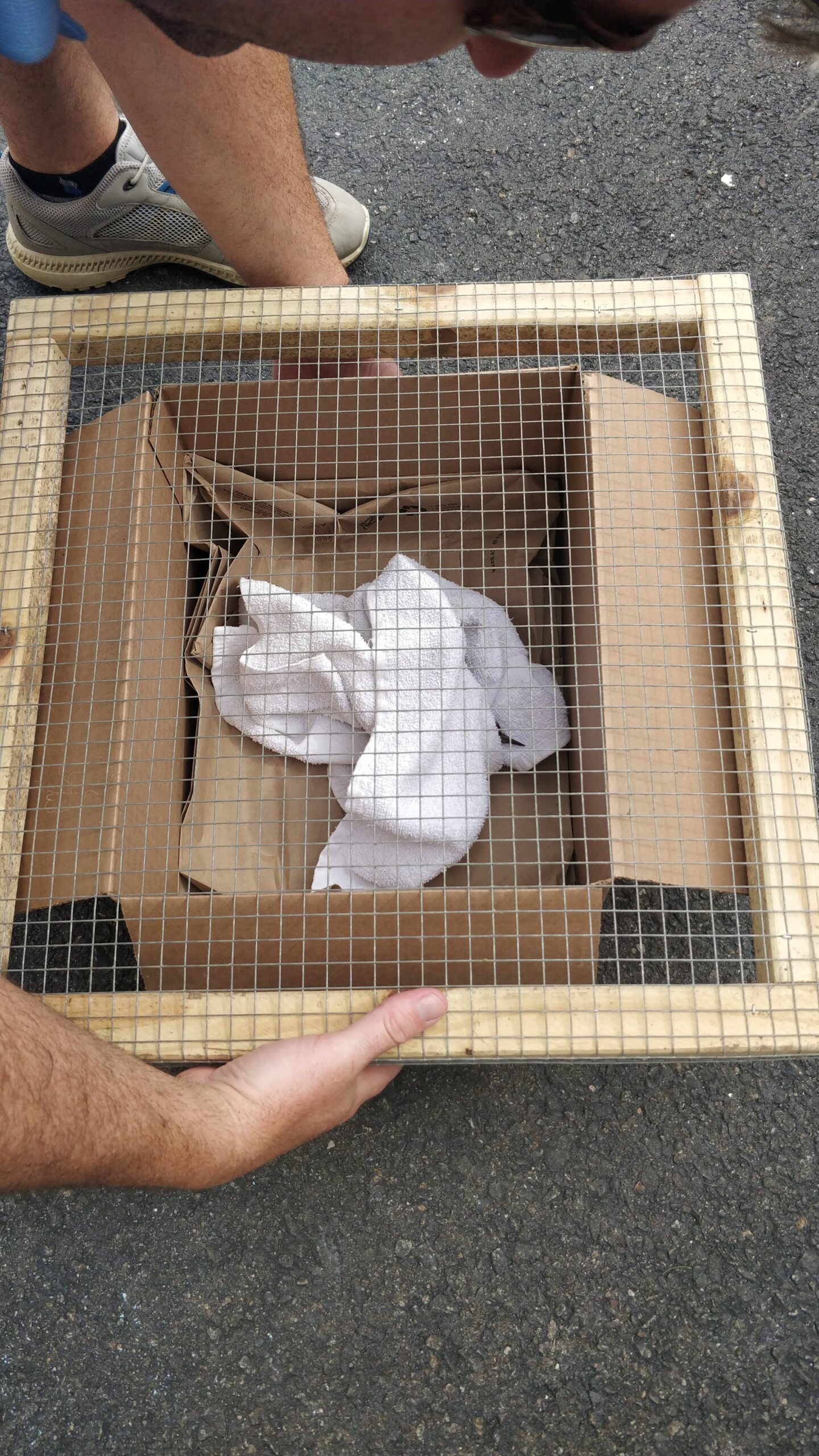 Following their specific instructions, in order to safely transport the bird to their center, we soon found ourselves driving with an injured bird, in a box, in our car. Our daughter intently watching his every move. (We happened to have a mesh lid in our shed, made for a prior rock and shark tooth sorting apparatus.) Halfway there, the bird clung to the lid and stayed there. He never made a fuss. Just hung quietly as the car bounced along for the 25 min ride. I kept thinking the whole time, this bird was dead on our doorstep not even a short time ago. And now it was able to hang from a mesh wire, showing off his little yellow belly and wait patiently there. 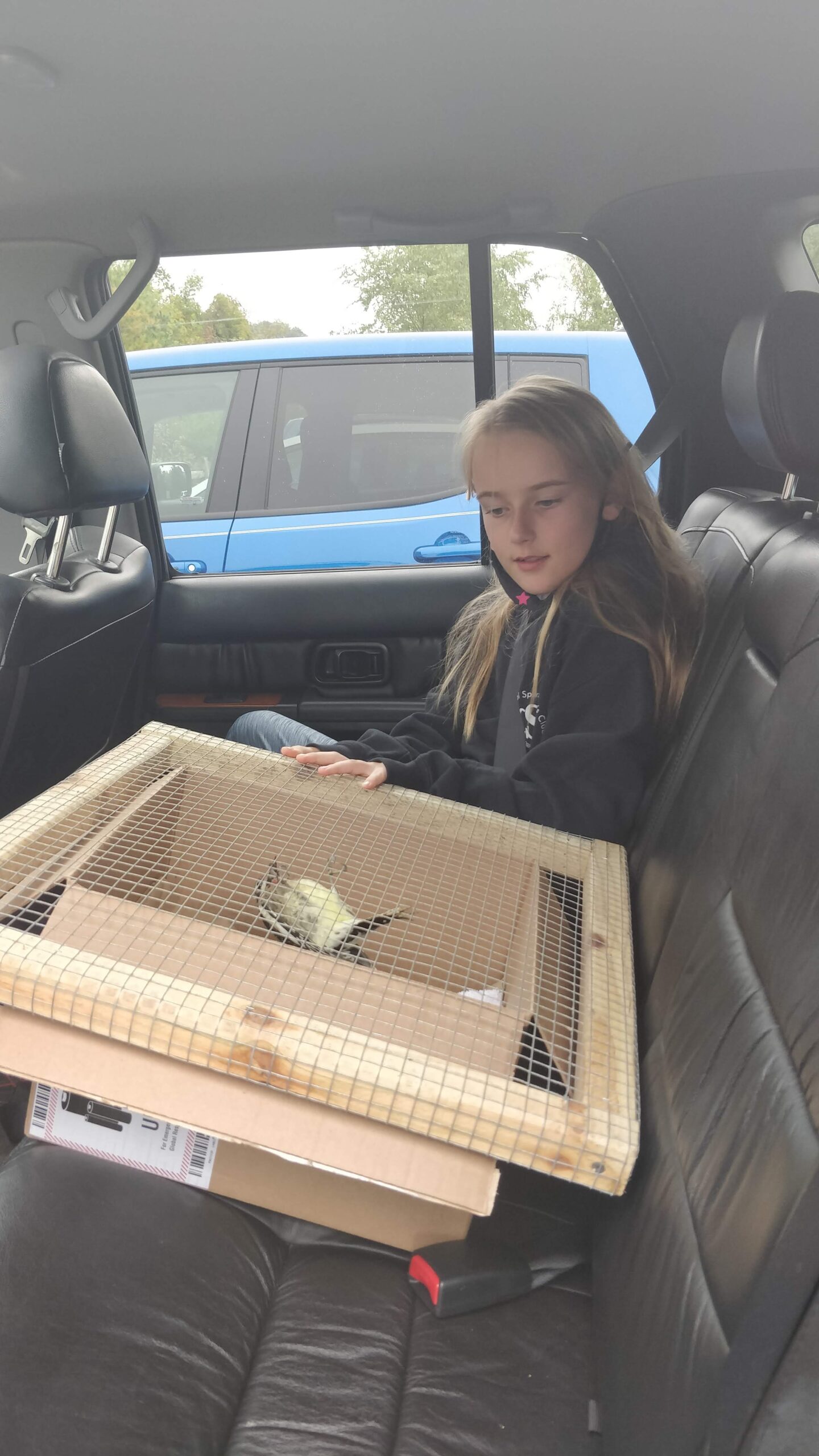 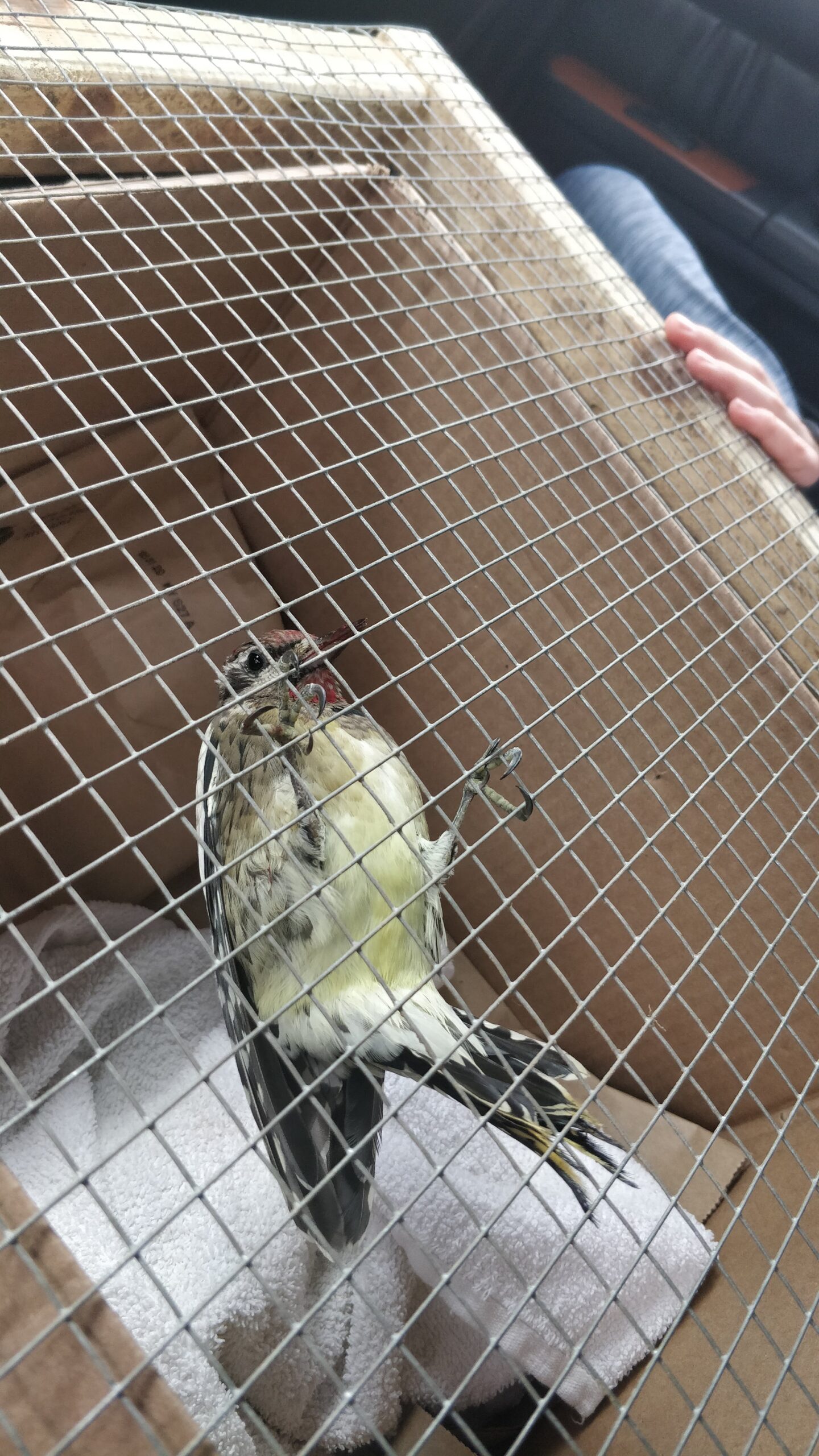 We arrived at the center and followed the instructions of “only one person in the lobby at a time” due to COVID restrictions and gave the woman at the front desk our information as well as the time and location of this particular bird’s incident with our front windows.

It was at this point that we noticed that the bird was no longer a bird, but a patient, and we felt a small pang of sadness not knowing what would then transpire. Thankfully, the small iota of hope we were given was just enough. We were given a small slip of paper with a case number on it. We were told we could call back in 7 days to learn about the status of our patient. We were also told that this was one of many bird strikes that had come in over the past few days. Not sure if that made us feel better, or worse about the situation with our little yellow-bellied patient. 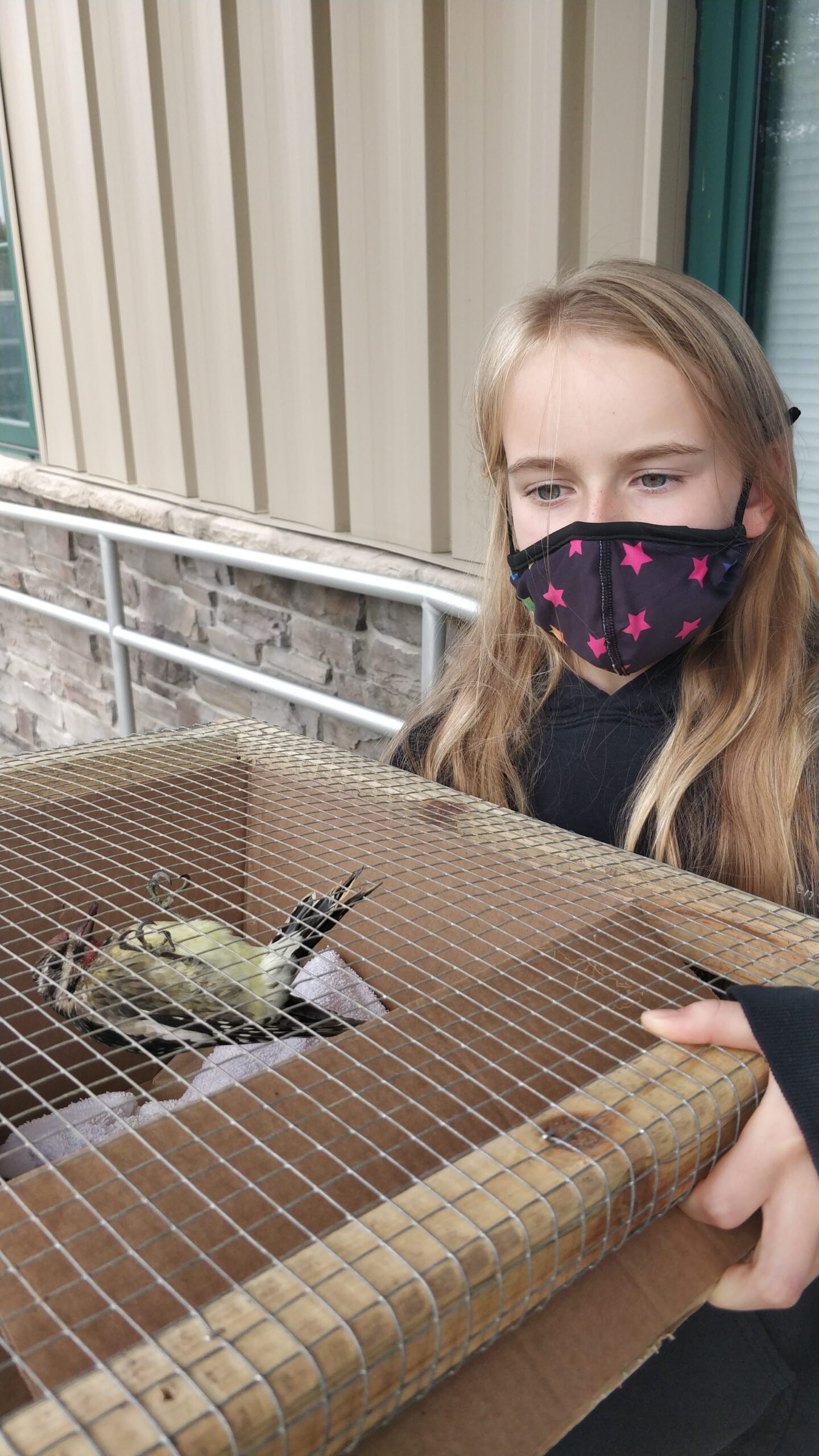 Indeed, we called back on Saturday, exactly 7 days later. The news was good. Spectacular in fact.

The bird was released on Tuesday. After we found out, we felt a pang of heartfelt relief knowing that we were able to help, and the Center was able to rehabilitate it to its full health.

You can read more about the Yellow-Bellied Sapsucker’s habitat, range, and identification here.

You can donate to the Center to help fund more success stories just like this one, here.

“The whole notion of releasing an animal back into the wild is one that should cause a person to stop and think for a moment. There is a satisfaction and rightness about it. It would be a celebration if the entire story had not begun with a sad reality…an injury, an illness, trauma or the loss of a parent. The imbalance with nature that we grow more accustomed to as we build our roads, our businesses, our homes and our lives gets righted just a little bit as a great horned owl takes flight for the first time in seven months. Or when a newly mended red fox disappears back into the woods, on its own again…frogs, ducks, bats, hawks, deer and turtles….

We need to remember wild. In the rush of our lives, we commit to our smartphones, a timely commute, getting the kids to soccer practice and a place to come home to. It could be that your idea of wild has come to mean that the lawn needs mowing. We need to remember that wild is one of the reasons we love our region. It is green and open and beautiful. We haven’t paved it all yet. It is our home, and it is home to an extraordinary array of wildlife species. Now we need to do more than remember wild. We need to save wild.

The moment a rehabilitated animal is released back into the wild is a powerful one that represents amazing levels of expertise, energy, care, generosity, grace…and work, on the part of many individuals. It is expensive on all fronts. But the true cost of not saving our native wildlife is unthinkable. Wildlife Center Friends exists to Save Wild.  We hope you will join us.”

One Reply to “Window Pain”