Usually in the morning, the sounds around Flutter By Meadows are about the same. The squawk of a blue jay off in the distance and the sound of the train going by. Maybe the racket of a woodpecker. This particular morning was something different all together.
A few weeks ago I spotted a Baltimore Oriole in a tree, something I have been longing to see. So I immediately put out some food for him. Their favorite: oranges and jelly. Nothing fancy, just a plastic cup filled with jelly that I placed on a broken bird bath stand that I had laying around. Oranges, I discovered… fit conveniently in a suet feeder.
He never did come back to feed, but I noticed something else that I wasn’t expecting. The gray catbird, a distant member of the mockingbird family, loves fruit. They eat mostly berries in the wild, so when this one spotted a tiny cup of jelly, she was on it…like bees on a honey pot.
So, this morning I came down to our kitchen windows as I normally would and I was surprised to hear every melodic song, tweet, kew, and churr that I have ever heard. The cat birds were screaming at me. Literally! It was like they were talking to me out there. I got out the strawberry jelly and filled the cup. I walked 15 feet back to our deck and by the time turned around they were already feeding on it!

Next time, they might be sitting on the deck railing holding up a sign that says: “More jelly please”. 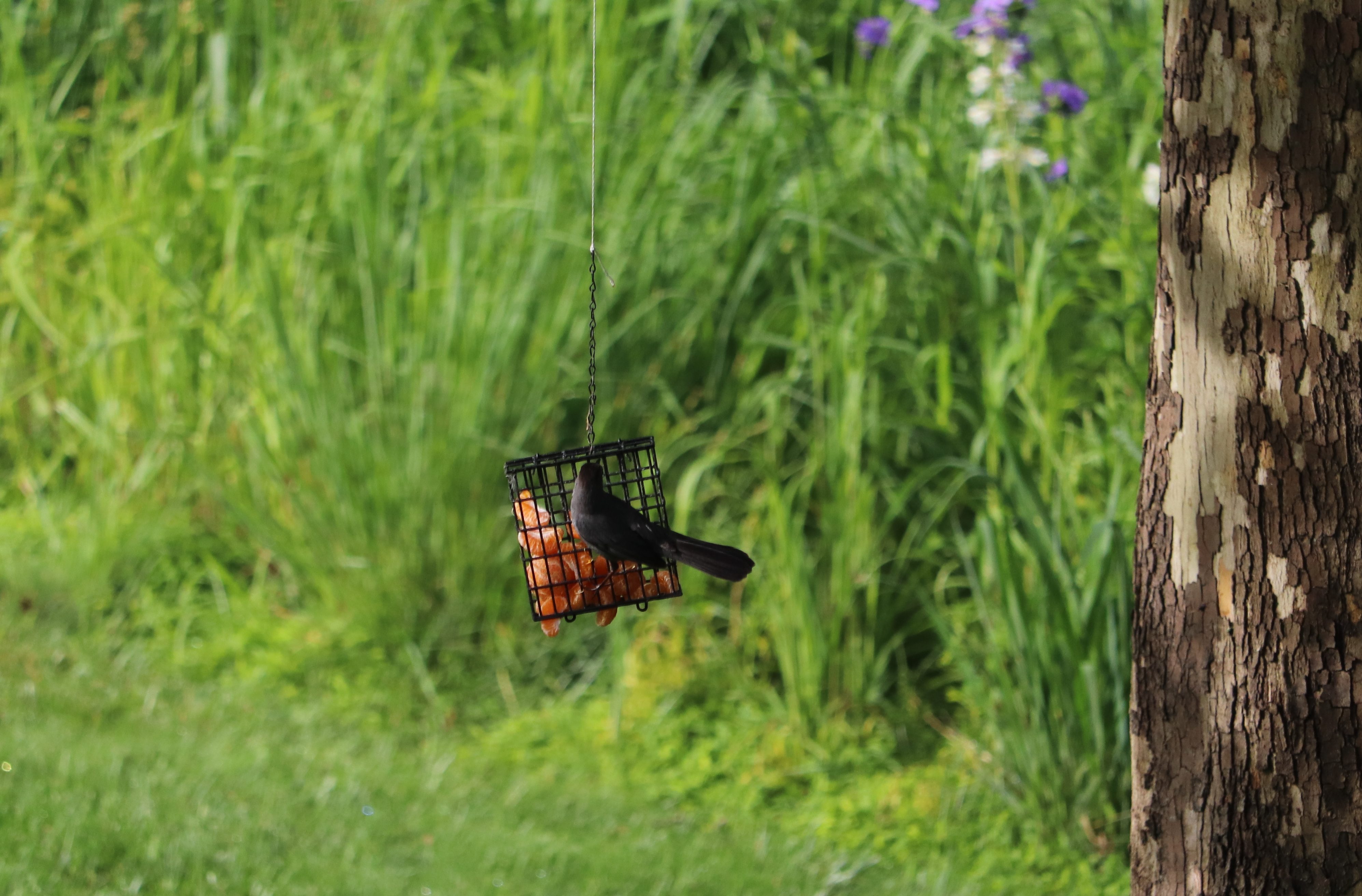 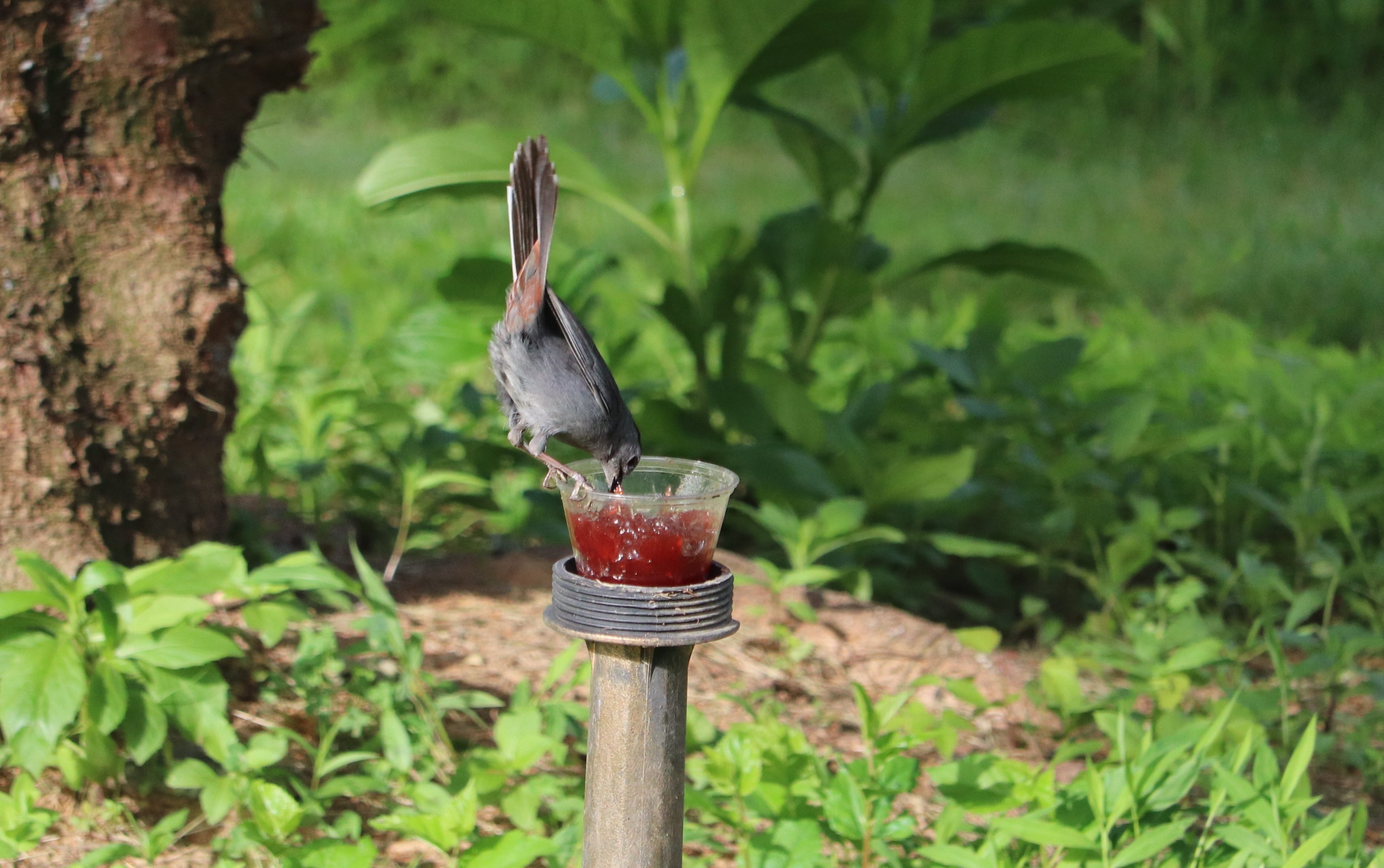 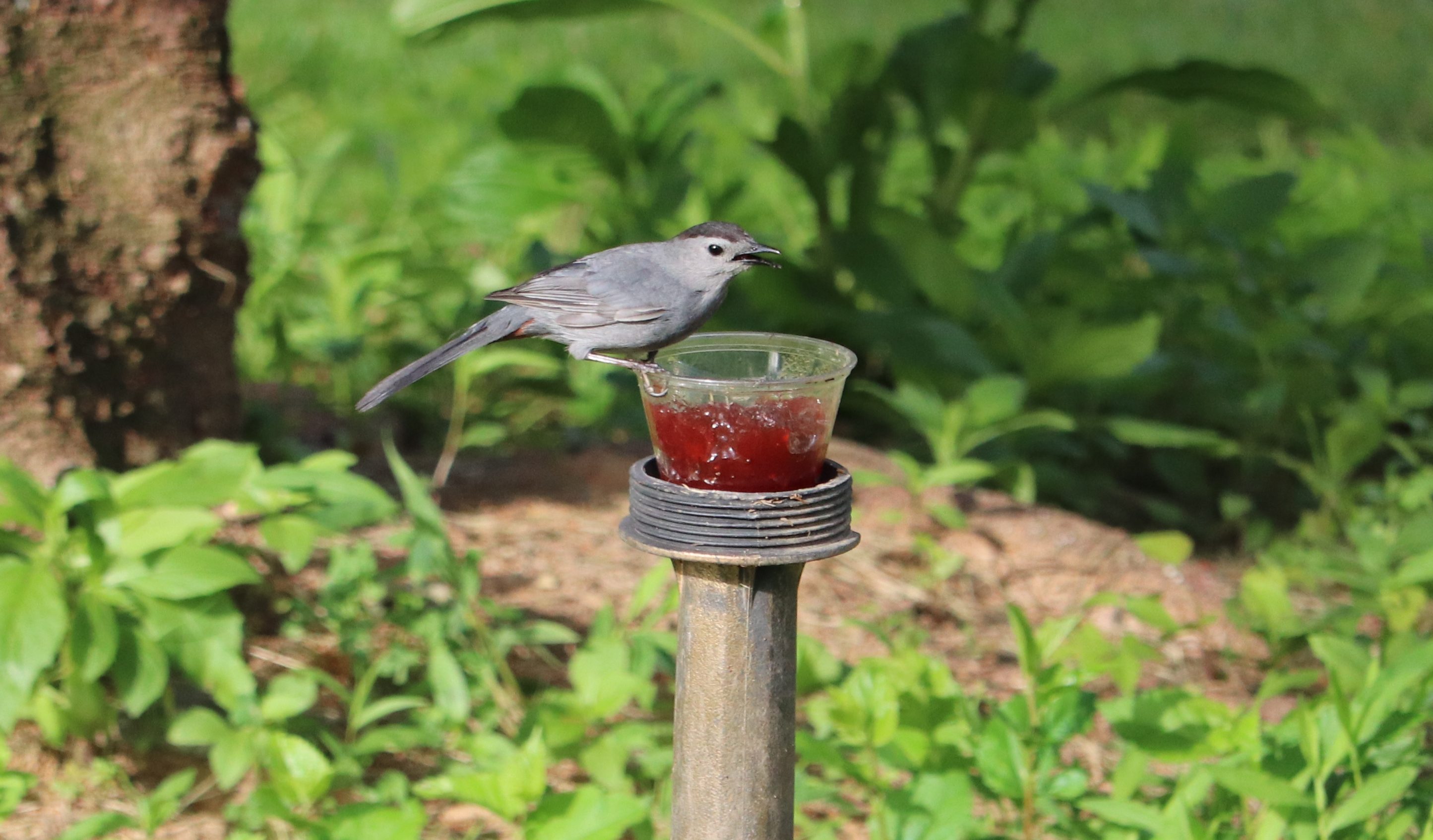 Here’s a description of this rather melodious singer, who no doubt gets their name from the “meowww” sound they so often make. Description below is from National Geographic’s Field Guide to the Birds of North America, 4th edition, page 354.

Notable singers, unequaled in North America for the rich variety and volume of their song. Some mimic the songs of other species.

Gray Catbird: Plain dark gray with a black cap and a long black tail. Song is a variable mixture of melodious, nasal and squeaky notes interspersed with catlike mew notes; some individuals are good mimics. Range: Generally common but tends to stay hidden in low, dense thickets in woodlands and residential areas.

As far as I can tell, they winter in Florida, Louisiana, Texas and south. Breeding range is most of the United States, east of the Rockies.

I am still hopeful that the Oriole will return, but in the meantime, this lovely singer I will happily enjoy in the meantime even if she makes me feel a little bit like a crazy cat lady. Before long, they’ll be heading south for the winter and I won’t have them singing away anymore.