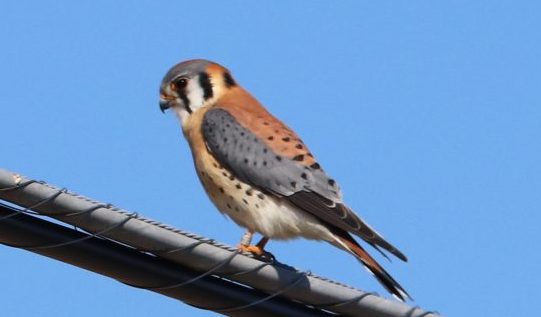 Building up hope for a threatened species

But we can’t forget in the back of our minds all the countless people that we don’t see working tirelessly behind the scenes to help end the uncertainty. The healthcare workers in make-shift hospitals. The restaurants finding new ways to do curbside delivery. The people making handmade masks in their spare time. The people scrubbing public places down with disinfectant. The scientists and infectious disease specialists working to find a vaccine. The people building tiny pop-up community food banks that look just like little free libraries to provide for people in need.

You can also take the flip side though too, and see the tangible benefits taking place around us. I see neighbors taking walks with their teen-aged kids. Some several times a day. I see neighbors walking dogs. (I didn’t even know they had a dog.) I started baking bread again. I have baked homemade bread only handful of times in my life, and know I find myself doing it weekly. Puzzle makers can’t keep up with demand. Cloudless skies are bluer as less and less vapor trails are being left by airplanes in the sky because less planes are aloft. Our closets are getting a good scrub down. And open space trails, at least near us, are getting a good number of people out and in nature for some much needed fresh air.

Looking for ways to get out and enjoy the first real warm spring day, our family unanimously decided to visit a wide open walking trail that we had not been to in over 8 months. But this was just as we were home-bound in quarantine. It was one of those days after we change the clocks where you can feel the days lengthening. We were certain we would go there and see the same bird we would always see there cruising the lowlands of the grasslands in search of his favorite meal. Broad winged, and a plain brownish gray color accented by bright white splotch on his long, slender tail. The aptly named “gray ghost”, the Northern Harrier is the bird we so often saw there. Other than the Red-tailed Hawk, it is probably one of the easiest birds of prey to identify from a distance. But, when we got to the Cider Mill Preserve, we were amazed to not see him at all. It was a strange, weird feeling to be so certain of a bird that we see there constantly, but it wasn’t there, anywhere. (The photo below was taken last fall, when we did see the bird with his unmistakable bunny-white tail.) 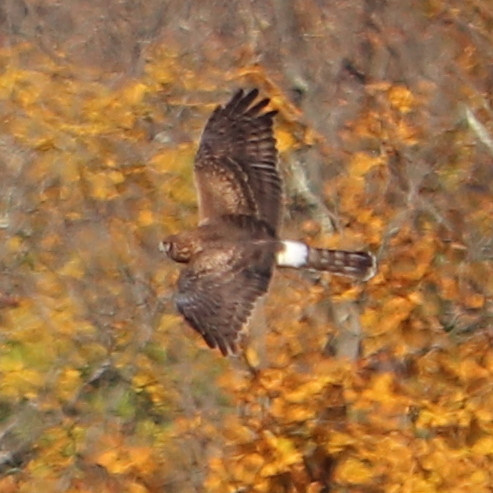 What we were not expecting though, is what we did see. The American Kestrel. First, we saw one cruising the field while we were driving the country road, then he landed on a wire with a fresh catch in his mouth so we could get a better look at him. Then, parking the car on the small gravel pull off at the trail head several hundred feet later, we saw at least two more. Not seeing the harrier became a little less top of mind now as a new sight that we were not expecting was taking shape. Seeing so many both flying, perching, cruising, and diving down we were suddenly deep into an area of bird watching we had never been before. Their tell tale “hovering” move directly before a dive down to prey in the field was unfolding before us like PBS special. A bird we had only once briefly seen from a kitchen window in South Florida, was now summoning us in a birders’ paradise. The smallest falcon, yet no doubt the most colorful. 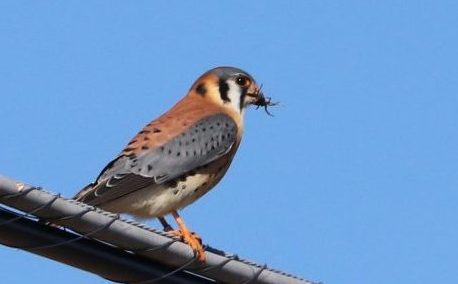 We had, as a family been learning about these fantastic little birds (no really…they are not much bigger than a Blue Jay) when we helped build nest boxes for them through the Friends of Hopewell Valley Open Space, and with the help Tyler Christensen and Calvary Baptist Church in Hopewell in March of 2019. The birds needed help. People from around the valley came to help build up opportunities for birds. 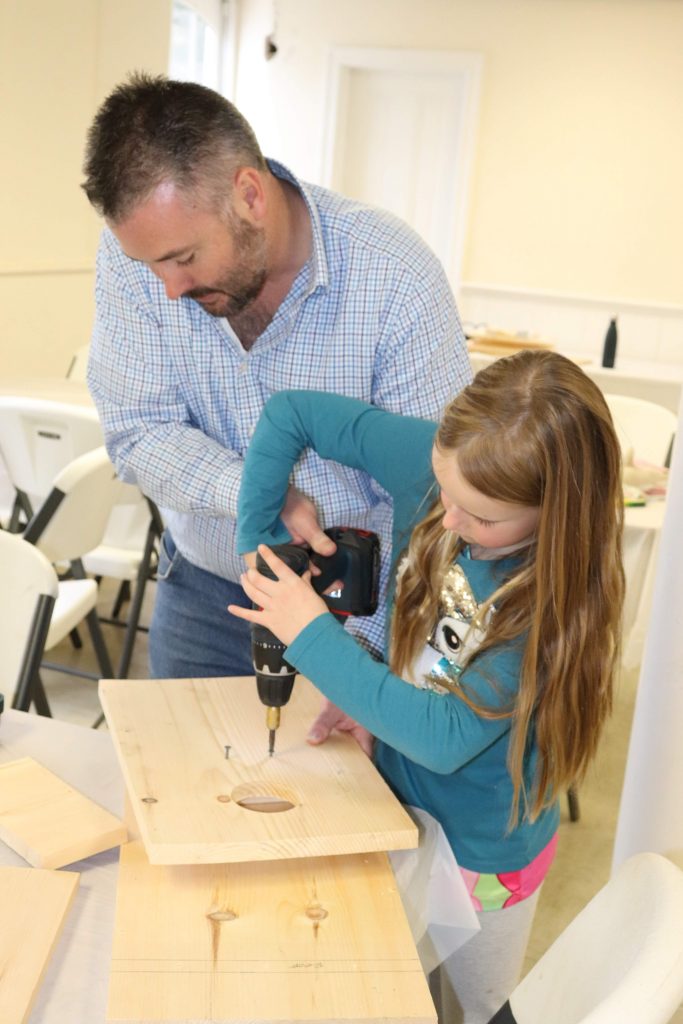 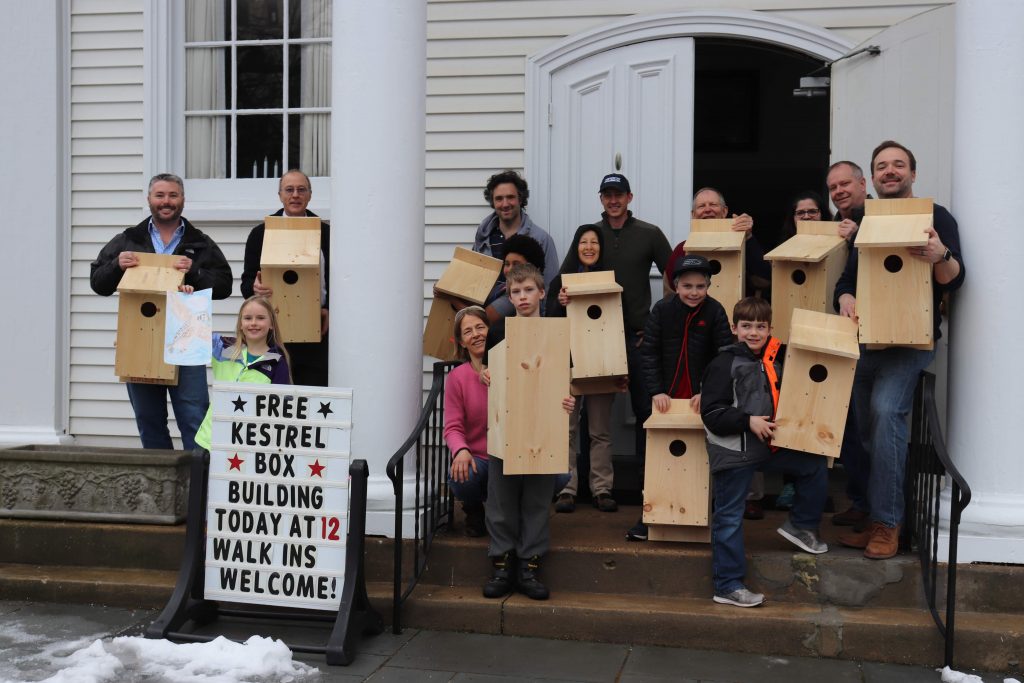 Numbers of these falcons had been declining rapidly in recent years in the Northeast due to habitat loss. They have been listed as a threatened species in NJ since 2012. These boxes, which now appear all throughout our little valley in efforts to encourage their nesting and reproduction rates where put together by volunteers. People on a mission to help out where help was needed. Bringing hope to an uncertain future. Additionally, people signed up to monitor the boxes on a regular basis and check for activity. The pictures below were taken in May of 2019 of the two boxes that my family monitors. 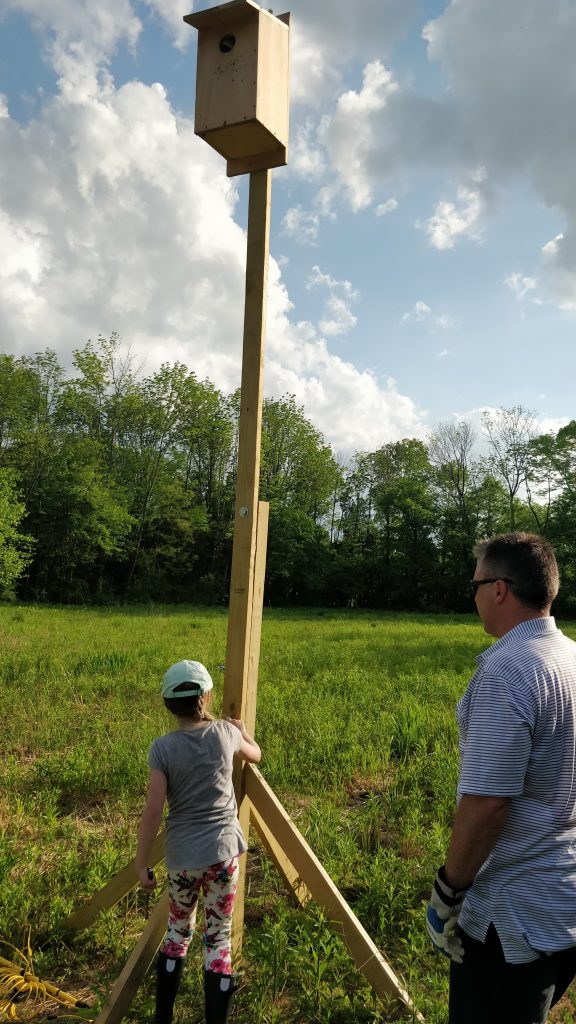 Kestrels are very particular about their nests. They require large, wide open fields, and prefer nesting holes that overlook these wide expansive fields. So, you can imagine that going out to monitor the next boxes requires no less than a 20 min walk, one way. When we get to the box, we approach quietly, hoping not to disturb anything. Save for the snake or voles in the field. We use an endoscopic camera and hope that we see some tell tale signs of kestrels. Occasionally, we find nothing. Occasionally, we find a dead song bird. And occasionally, we find a bird that shouldn’t be there like a European Starling. But seeing the kestrels flying about at a local preserve gives us hope. Hope that a bird with an uncertain future, much like the future we are currently uncertain about, is making a comeback. We noticed as well, on the bird I photographed that he is also banded. Note the band on the left talon.

Our future is uncertain too right now, but we have to have hope. 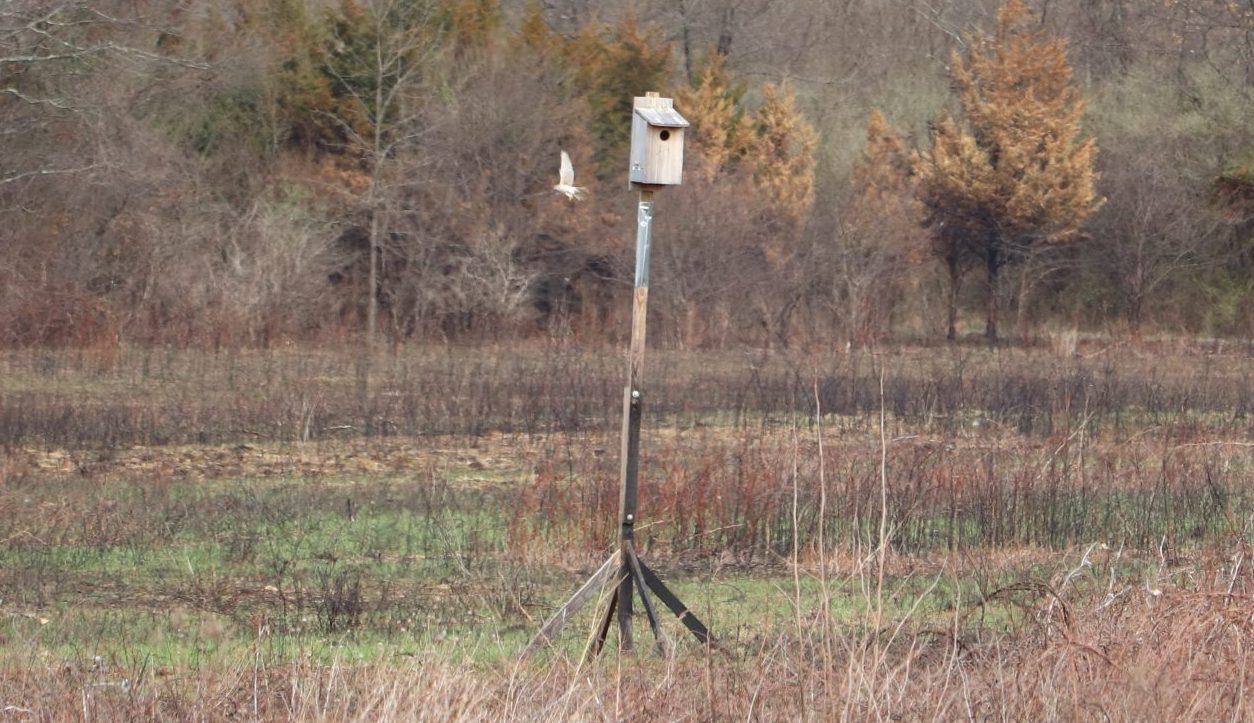 And seeing numerous kestrels on one weekend, and again one week later at Pole Farm in Pennington (pictured above), certainly gives me hope on success of this colorful bird of prey that I barely even knew anything about just a few months ago.

Several weeks ago I knew nothing about COVID-19 either. But seeing how the community is coming together to fight it, I think there is hope for its uncertainty as well.