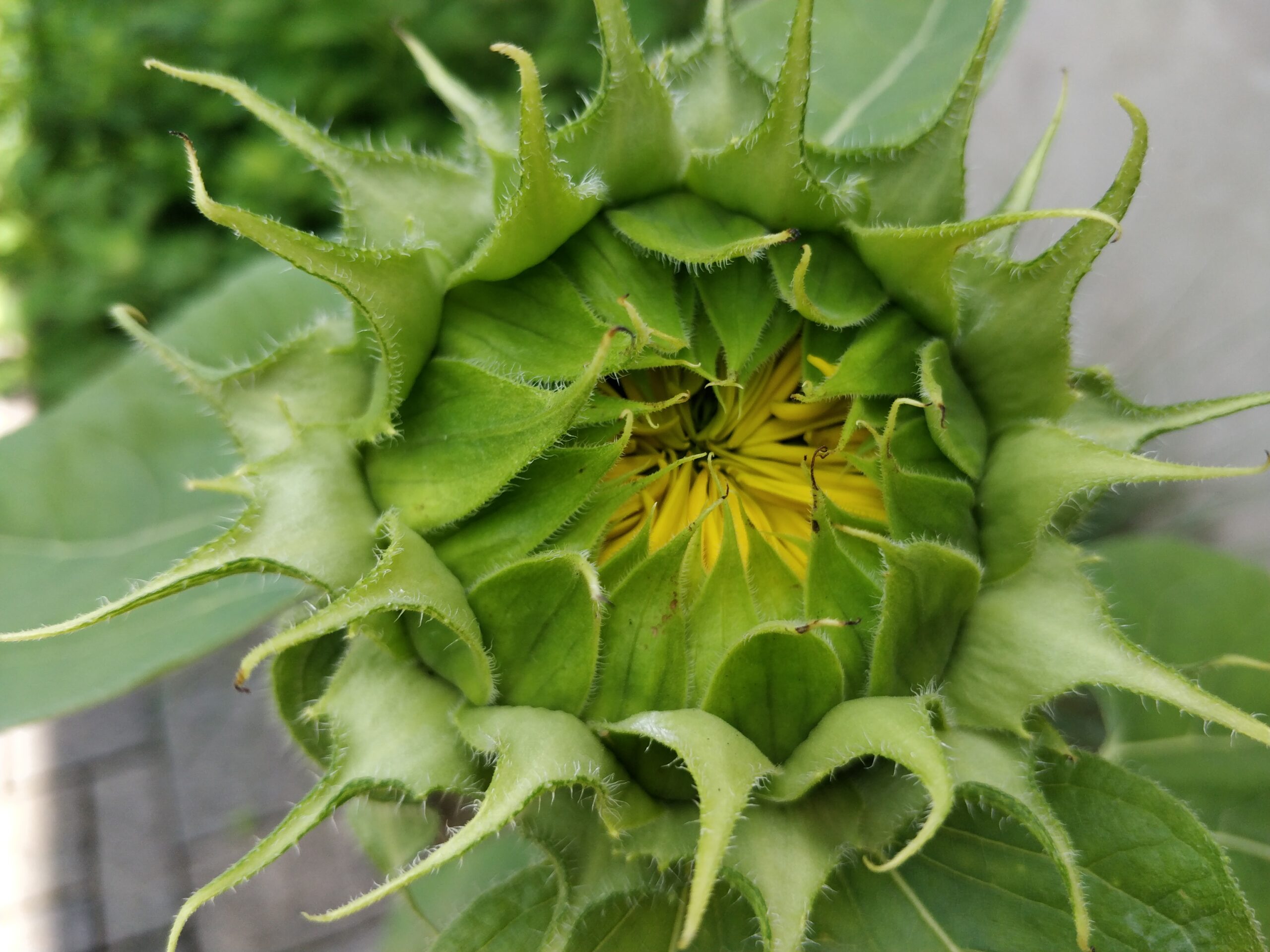 From Seed to Shining Seed

Birds in My Backyard — The American Goldfinch

Did you know that American Goldfinches are known in the bird world as some of the strictest vegetarians out there? I did not as of this morning. They eat thistle, nyjer, sunflower, and coneflower seeds among others. Often using some pretty acrobatic moves with their nimble abilities to reach the seed heads. What’s more, is that baby Goldfinches eat only seeds too from their parents and because of this, these colorful little birds need to nest and raise their brood well into June and July which is quite late in the North American bird world. Only very rarely will they eat insects. I always assumed that all baby birds ate caterpillars, slugs, and other soft slippery things that parents could shove down their endlessly hungry beaks. 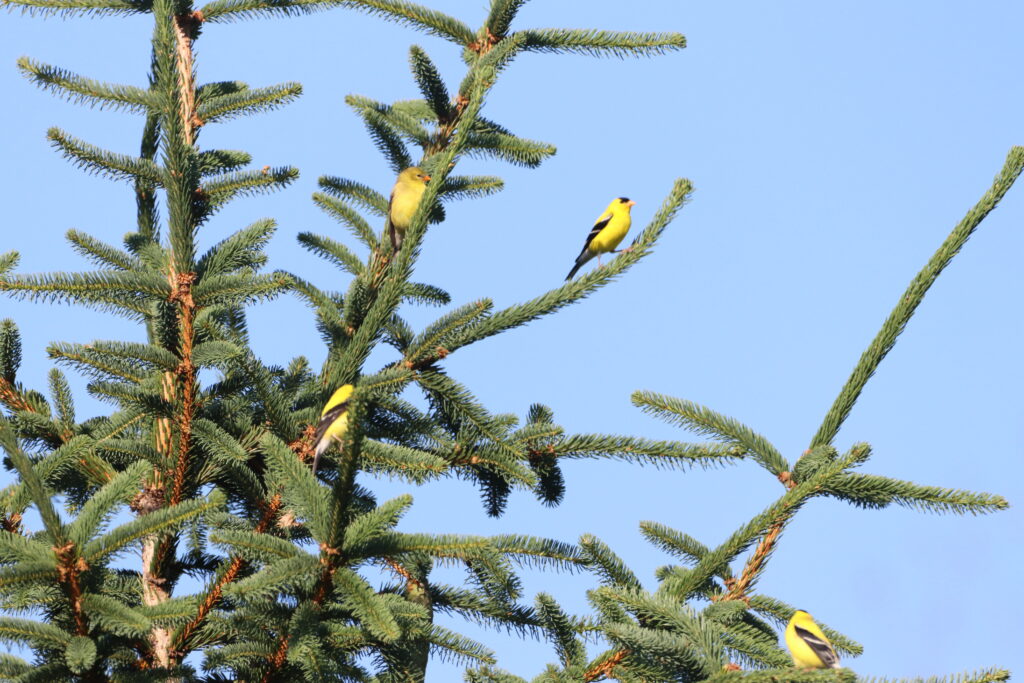 Therefore, in order to provide such seeds for their brood, they must wait until later in the season when seeds are more readily available. (They also use the fibrous materials in the stems of certain plants to weave very tight nests).

Side note, this spells bad news for the Brown-headed Cowbird who will lay her eggs in the nest of another bird. Unfortunately, this vegetarian diet won’t work for the baby cowbirds and they don’t make it into adulthood. Here is another article on this rather annoying behavior known as brood parasitism.

When this female (pictured below) showed up on July 4th to feed on the sunflower in my backyard, I realized that there is a lot I didn’t know about this adorable, dainty little bird. I wanted to know more. 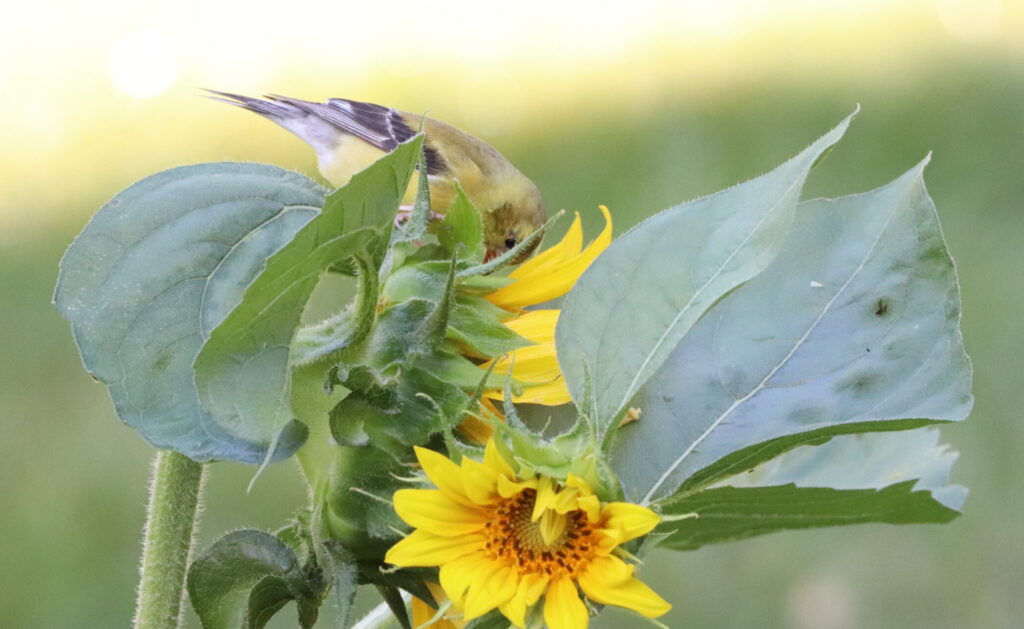 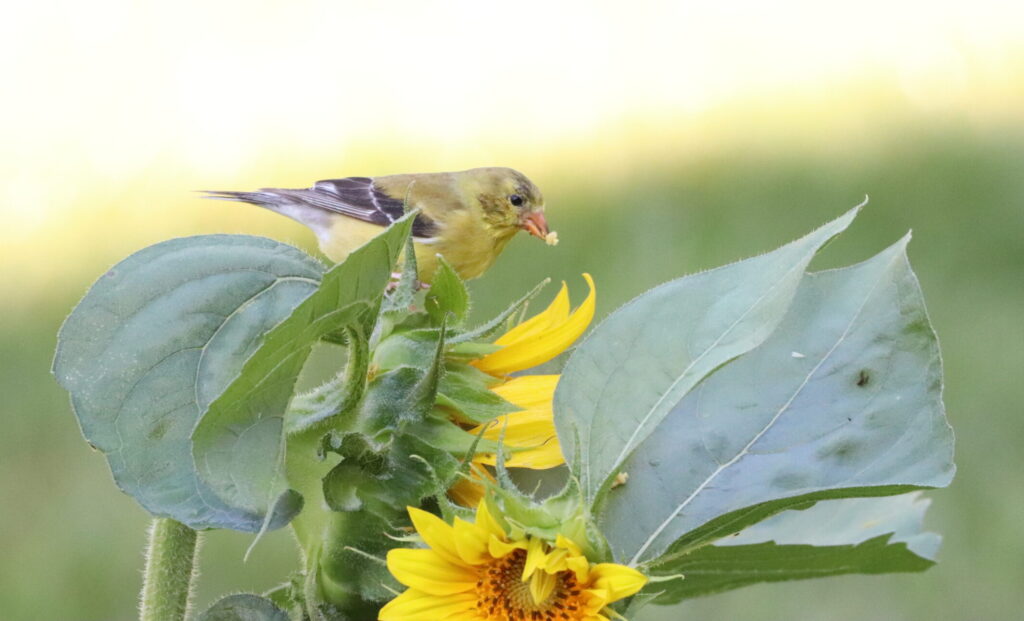 Dainty yes…but they are actually quite a strong little devil, known to burrow into snow tunnels to keep warm in winter. You might think that they do not stay here in NJ for the winter, but they do…there is no bright yellow feathers in winter due to their ability to molt in fall and lose that bright plumage. So while it may seem like they migrate for the winter, many in fact linger around if they can find enough food. This male Goldfinch I photographed (see below) feeding on a budding tree in early spring…note his coloring just coming back into bright yellow for the summer breeding season. 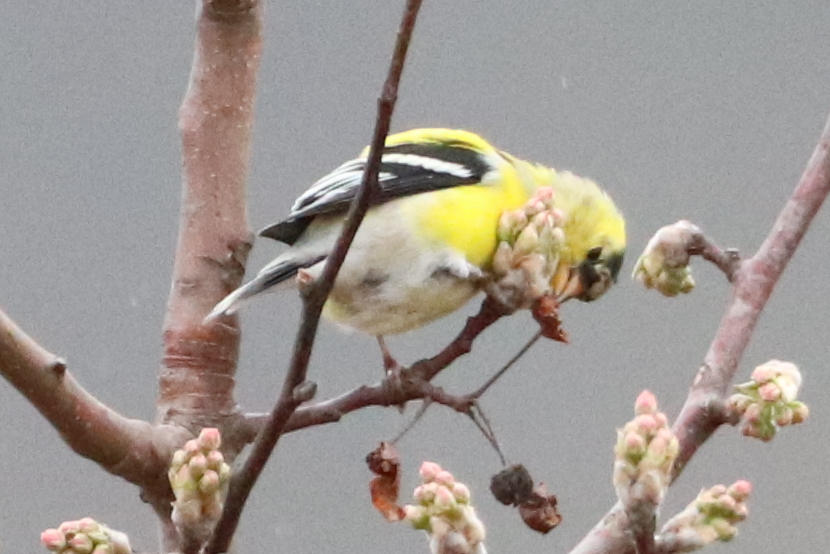 The photograph of the American Goldfinch feeding on a sunflower seed head on July 4th in my backyard, became the subject of this blog post because oddly enough, I didn’t plant that sunflower. Nor did I plant the four or so more that are popping up around our mulch beds. 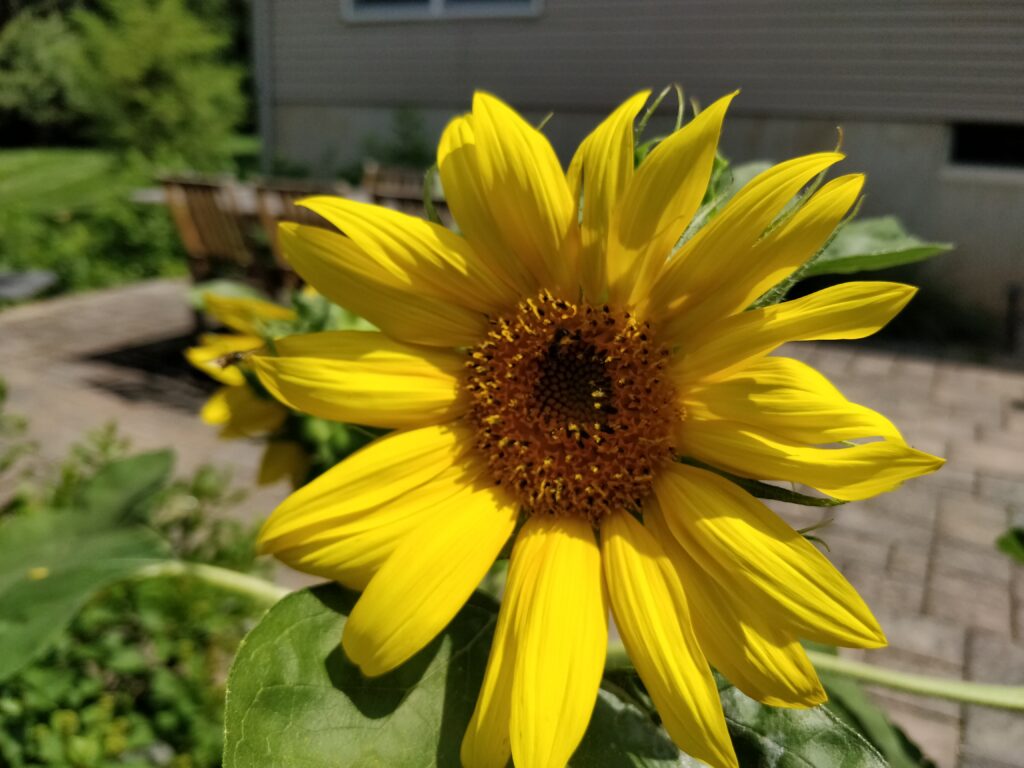 Not unlike the many flowers in our native plant garden that self seed themselves, these glorious yellow blooms are the works of nature.

That is… they were planted by either falling from my feeder, or falling out of the memory bank of a squirrel or Blue Jay that cached them!

At one point or another in late spring, we ran out of the peanut halves that we normally have out for our birds. So we put in a mixture of seeds which appeals to Woodpeckers, Cardinals, Finches and Nuthatches too. 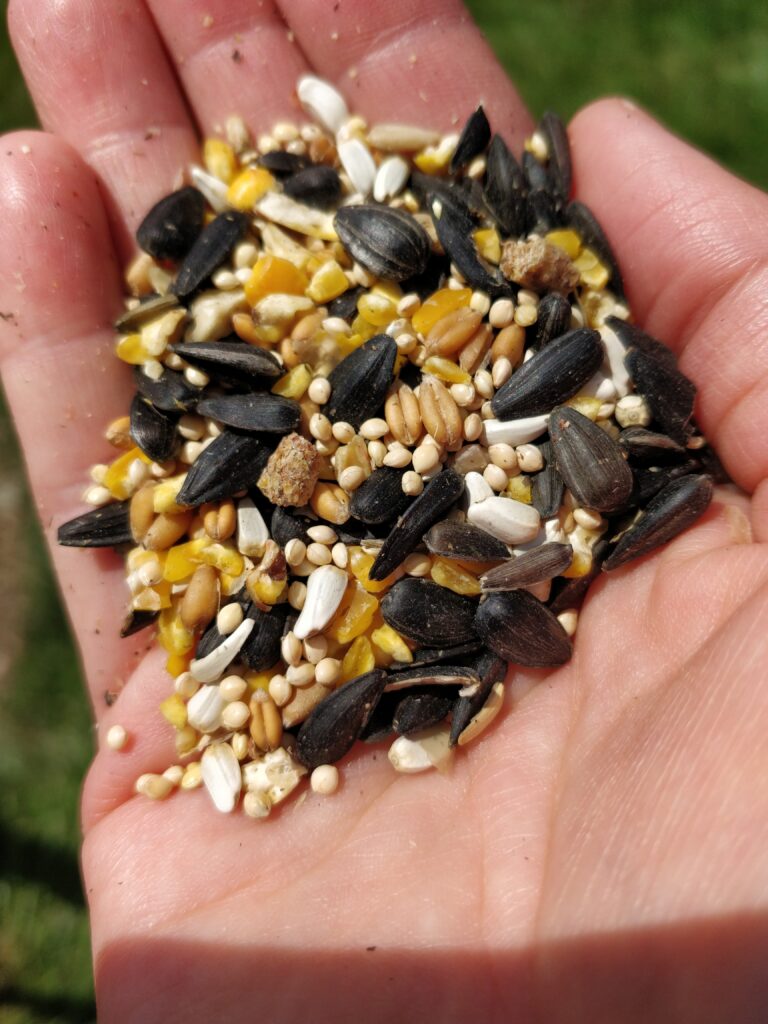 Well, when one or two or three gets strategically placed by a Blue Jay or accidentally forgotten about (several months later) you have magically-seeded sunflower. Birds like to leave little presents for us I guess…a gesture of gratitude. It could have been a squirrel too I suppose. 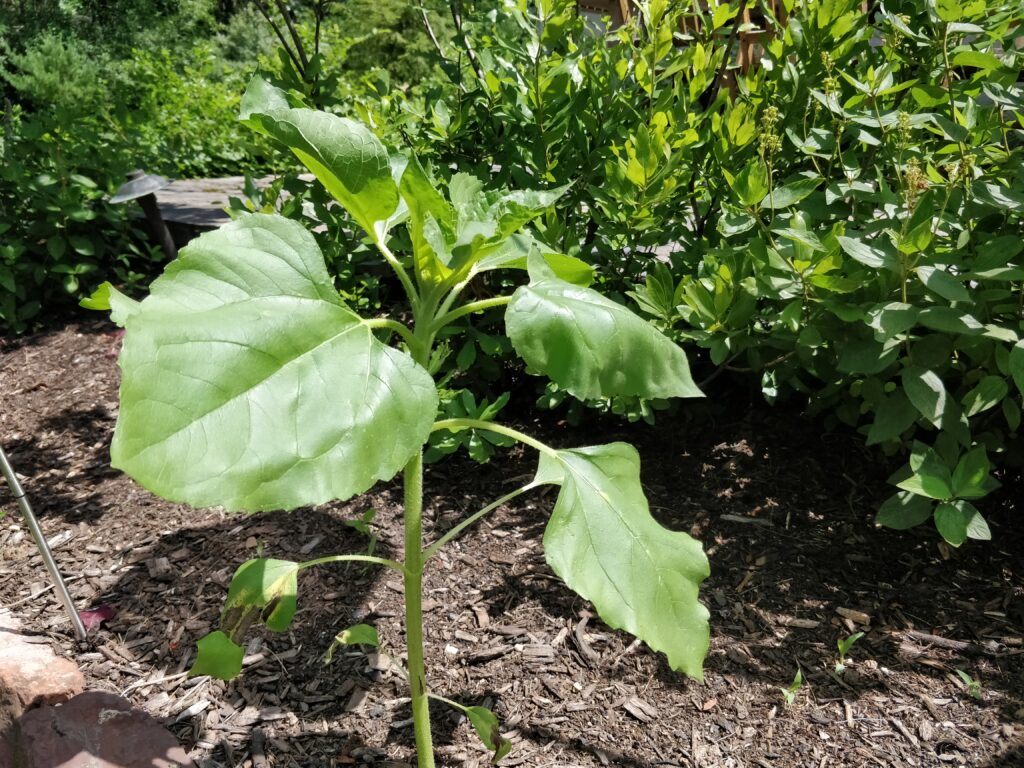 A common visitor to backyards all over the United States with quite an extensive range, the American Goldfinch also happens to be the state bird of New Jersey (and Iowa and Washington too). But you can attract them to your yard not just by bird seed in a store bought alone. This one is foraging on a seed head of a Black-eyed Susan. I saw one feeding on a dandelion flower too! Here’s another post I wrote about attracting birds to your yard. 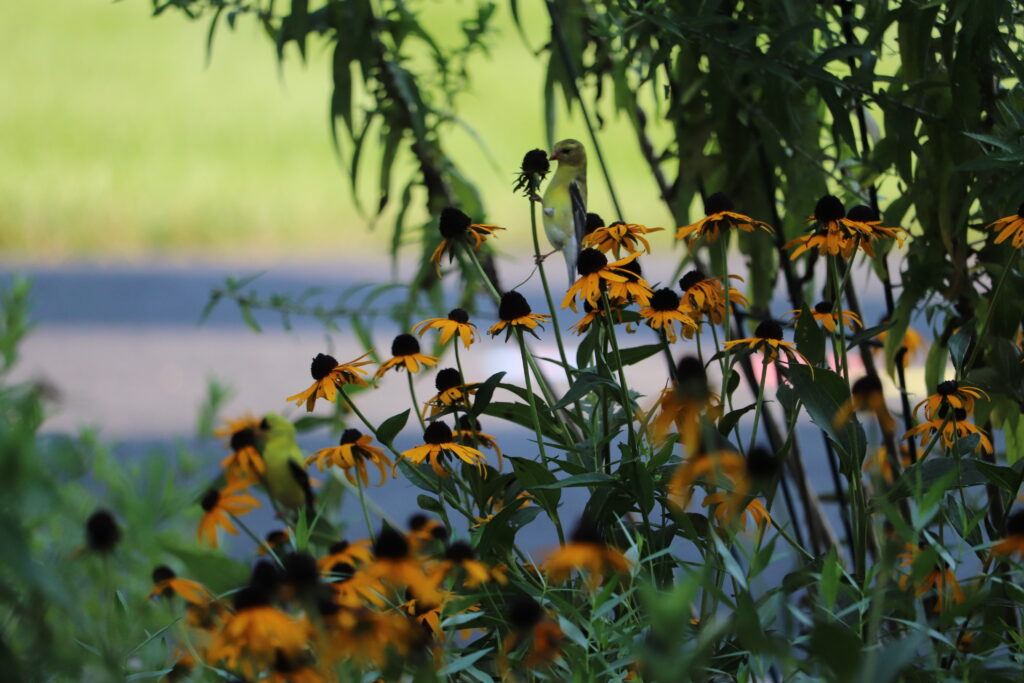 Here’s a fun 2-min listen on the secret lives of goldfinches from Bird Note, a great website and Podcast. ENJOY! They make the most darling sounds. It is worth a listen.