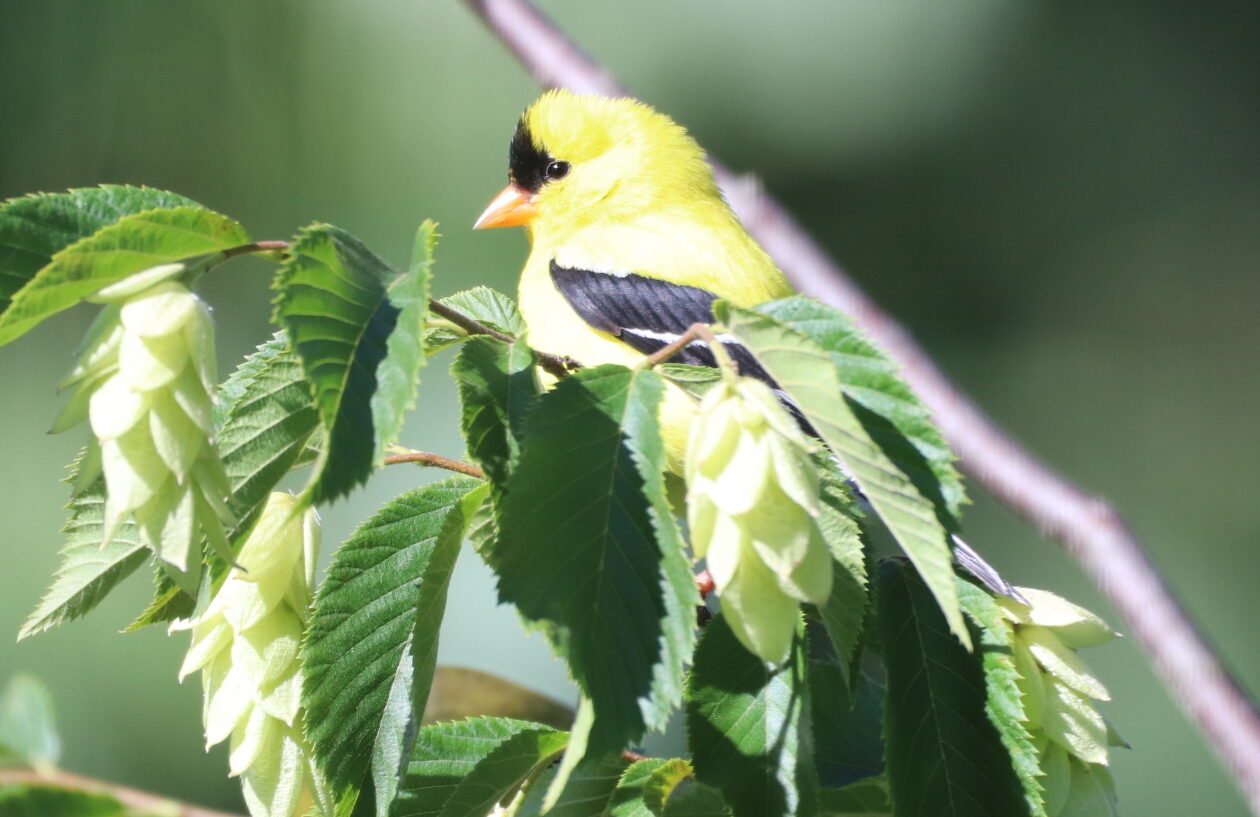 We Planted Weeds, and We Couldn’t Be Happier

The Wild Nature of Native Plants

Gardening for wildlife is not something we set out to do early on. But then, something happened. Waking up every morning and seeing activity in all things with wings, feathers, fur or even scales and carapaces is a simple delight. Around 2016 we started planting native plants around our house and in our backyard. With that, wildlife came en mass around our home.

Areas of our property slowly evolved into having names: Robin’s garden, the tree of life, the mini meadow, turtle woods, foxes’ den, and the opportunity garden to name a few. Seeing an American Goldfinch foraging on a Hop Hornbeam tree is a delightful way to start a day. Their golden yellow plumage glinting in the sun against the black wing bar is just stunning. The quiet chirp they make in flight even more special.

Many of our plants in our garden I see growing along roadsides or in the woods in the Sourlands. Wild geranium or golden ragwort to name a few.  They are native to the area and have adapted well to the rocky soil, and the climate. We also have a few plants that by name, are called weeds. To a gardener, a weed is a nuisance, a plant that is out of place and doesn’t belong there. And that is exactly how these plants got their names in the first place. Yet, in our yard they have a purpose. In the eye of the beholder too, they may seem a bit “wild” or messy to some. The notion that native plants are not tidy or organized is one mentality I hear a lot. In fact, I have even heard the term swamp used in reference to a portion of our garden.

We don’t see it that way, and the Gray Catbird moves in here every summer from Central America…so they like it too. And just like the return of some of the birds during the spring migration, so too do the plants return. Sometimes in places were we did not plant them. They opportunistically hop a bed or skip across the rain garden and self seed. In defense of the untidy appearance, a two-legged visitor to our yard may wonder why is there a seedling Elm tree growing out of the fragrant sumac bed. Well, why it doesn’t belong there per se, we may want it there several years down the road. There is a non-native tree we have not far from it whose life span tops out at about 20 or so years. When the tree goes, so does the shade for our patio on long summer afternoons. Enter, the Elm. One may also wonder why we have random sunflowers growing out of our flower beds. They are the result of forgetful Blue Jay or possibly a forgetful squirrel.

There’s a book by Douglas Tallamy which I think every person who owns a home with some land or an apartment with a balcony should read. I am going to quote him here because it is by far the best explanation as to why native plants have gotten such a bad rap. He later goes on to mention, what on earth would make someone want to plant milkweed? But if it was called monarch’s delight they probably would! Thankfully, a shift in mentality is slowly taking shape. Homeowner’s are encouraged (and sometimes even given incentives to plant native). Additionally, many nurseries are having a hard time keeping up with demand as native plant sales have been exponentially growing in recent years.

On page 170 of Nature’s Best Hope: A New Approach to Conservation That Starts in Your Yard he writes:

“Our subjective perception of where plants belong is how so many of our native plants came to be called weeds. When Europeans first arrived on the shores of what is now Virginia, they imposed European farming techniques on the New World. This was not the way Native Americans grew crops, but Europeans planted monocultures and did their best to weed out all other plants. Any plant that grew uninvited in cropland was called a weed and became an enemy. In many cases, the word “weed” became part of their common name: Joe Pye weed, horseweed, New York ironweed, milkweed, ragweed, pigweed, bindweed, smartweed, pokeweed, butterfly weed….”

It’s true, weeds are out of place in some areas, but at Flutter By Meadows, they are what we planted, and we couldn’t be happier. In fact, we have plans to plant more!

A few works in progress at Flutter By Meadows are in the making and yes, there are more “weeds” in the plant list. We are adding a bed underneath our large Sycamore at the corner of our meadow, and we are adding a Hawthorn grove. Queue the Cedar Waxwings…they will come in droves! Another delightful bird I welcome to our yard. They are already here for the Serviceberry and the Winterberry, and the Elderberry. Now they will have more.

Walking to get the mail takes a really long time for me. Not because my driveway is long, but because the wildlife I encounter along the way slows me down. I might spot a Ruby-throated Hummingbird in the rain garden, or a hawk soaring above. I might see a butterfly popping around or laying eggs on our parsley. Aptly named, our home always has something “fluttering by.” Even in the winter months, when the plants are dormant, the Eastern Bluebirds forage in the meadow and the hawks are on the lookout for mice.

Our garden evolves with the seasons and aids in life cycles of all kinds of creatures along the way. This year we have the added bonus of cicadas around. Our garden functions as a small oasis of native plants that help bees pollinate, birds forage, and life happens every single day, weeds and all, and we love it.