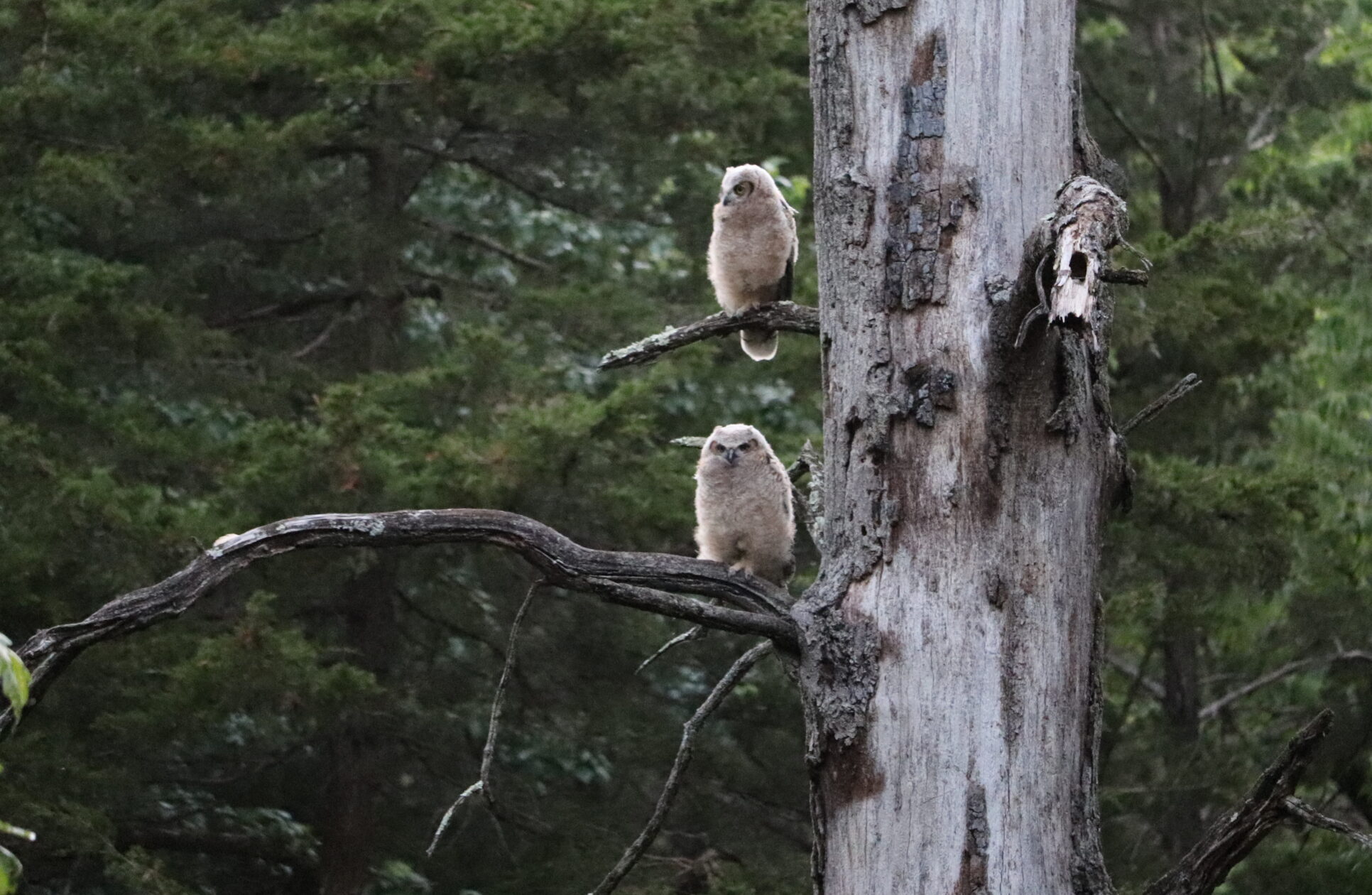 The amount of trees dead or dying in the eastern half of the United States is no laughing matter, despite the pun I played on this title. Green rolling hills and valleys from the Adirondacks to the Appalachians, and beyond, an ashen island breaks up the arboraceous view.

But there is one other option. A wildlife tree, or a habitat tree. An intentional snag left standing just high enough to not be a danger.

Gray skeletons reaching for the sky is a common sight in many forested areas and even along tree-lined streets in neighborhoods. Those that haven’t been taken down or fall on their own are standing in the hot seat waiting their turn to head to the chipper, the splitter or the firewood processor. They wear a ribbon or splotch of paint marking their demise. The Emerald Ash Borer has been making its way across the country steadily since 2002. The below image was taken at a hiking spot in the Sourlands, in central New Jersey. The tree showing the signs of severe damage, including the “blonding” where chunks of bark are falling off. Woodpeckers know where the good stuff is, and peck off the piece of bark. Eating the tasty morsels hiding under the bark giving the tree that blonded look, but not in a very good way. 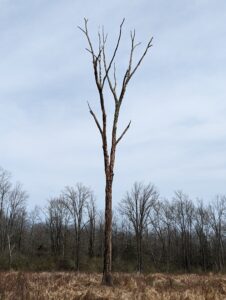 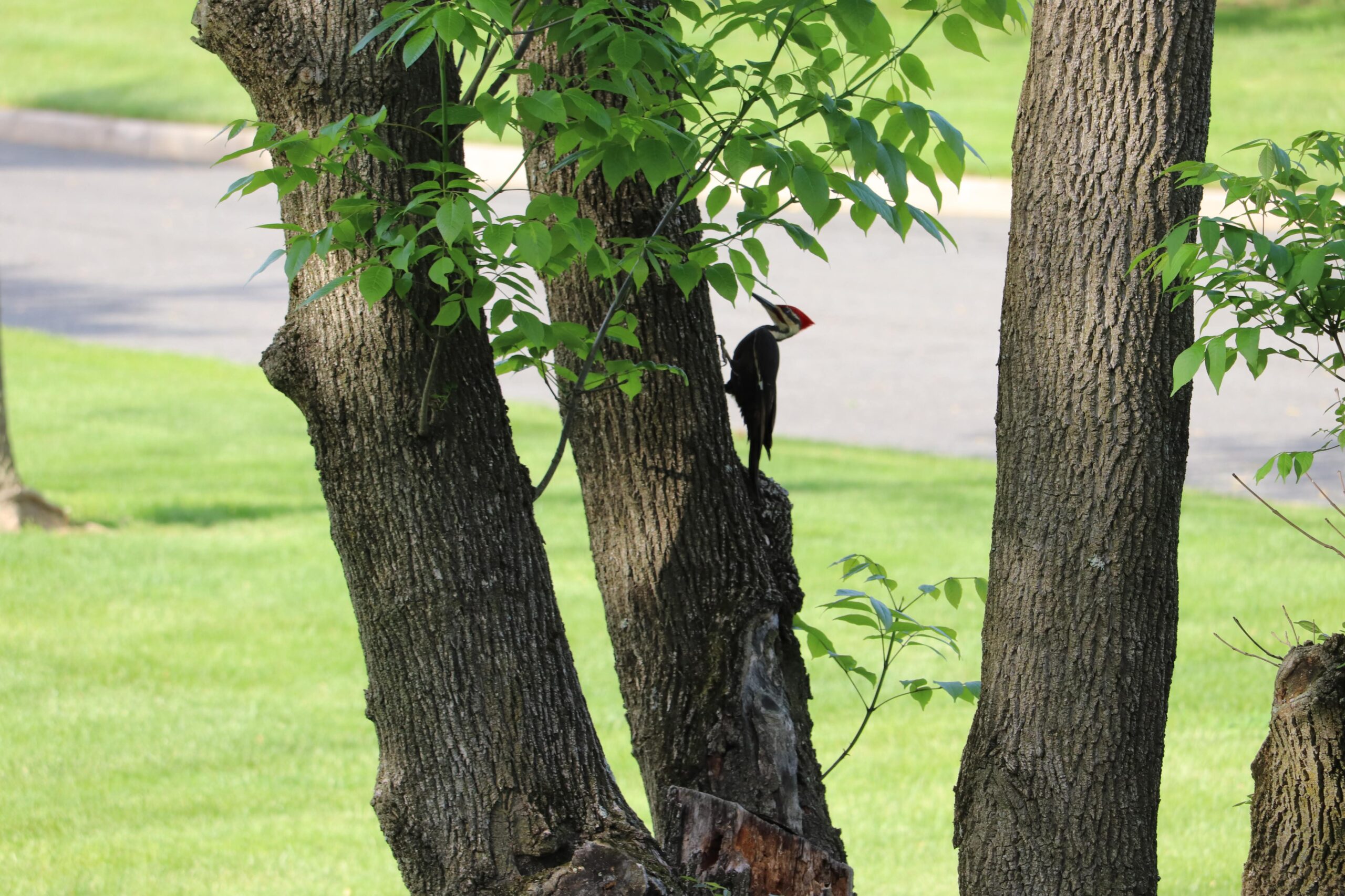 Our property has its fair share of Ash trees and approximately half have already met their match. (No, we didn’t burn them…). We have treated some for the Emerald Ash Borer, (and we continue to treat them) but a few were so far gone, that it was not safe to keep them standing. One we had cut down was extremely difficult emotionally because we were losing shade and a tree so stately, we named it the Park tree. But, to help soften the blow, months before we took it down, we planted its replacement: Buddy. A Tulip Poplar growing next to the tree that was to come down. Knowing that trees do communicate with one another, I can hope that Buddy gained some strong wisdom from his mentor.

But there is one other option. A wildlife tree, or a habitat tree. An intentional snag left standing just high enough to not be a danger. In fact, there is an organization in California made up largely of volunteers called The Cavity Conservation Initiative. 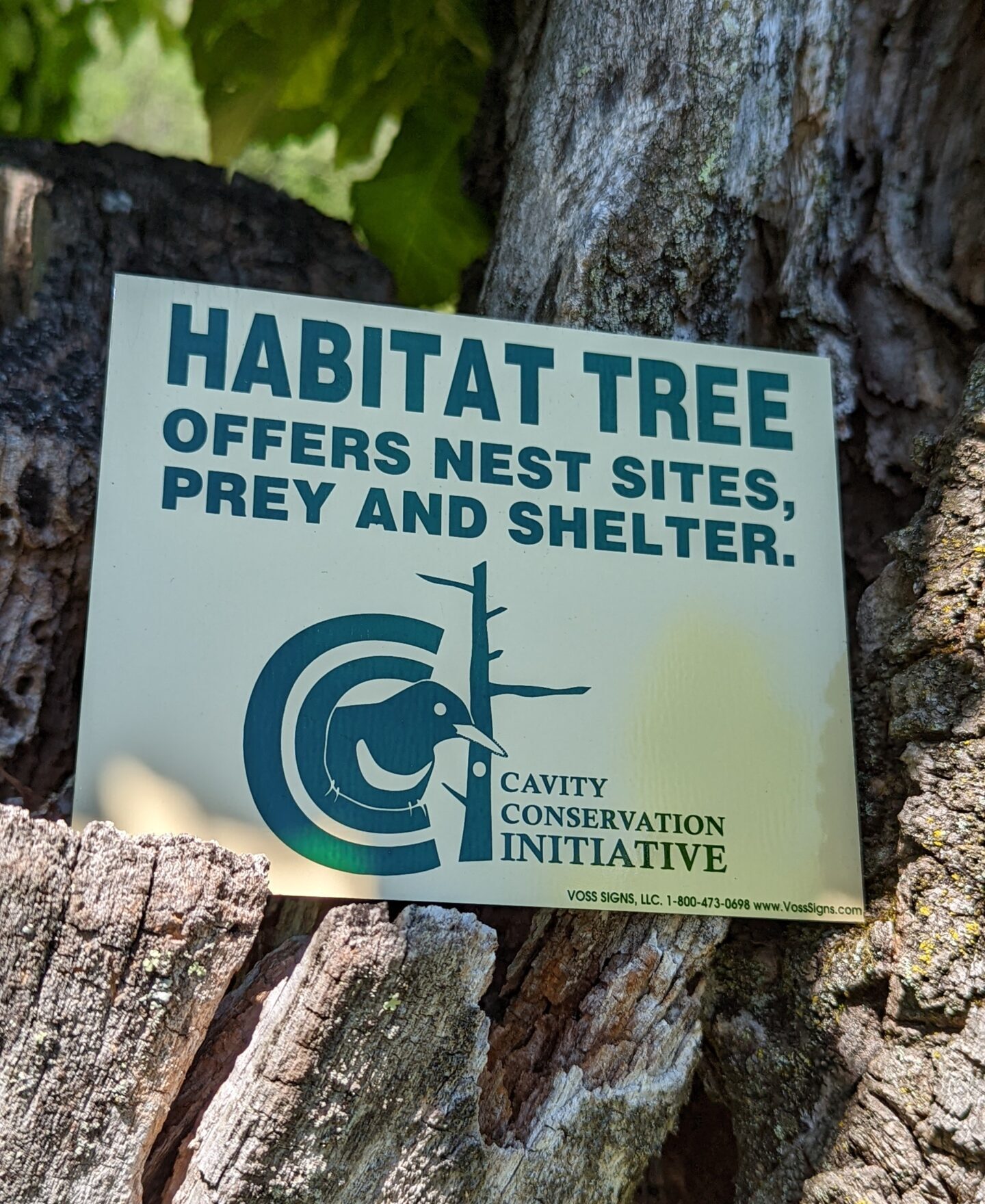 To promote the safe retention of dead and dying trees to ensure the future of cavity-nesting wildlife and to enrich forest diversity.

Many animals make their homes in dead trees. Raccoons, for example. Certain songbirds prefer to nest in trees when raising their young. Old holes made by woodpeckers turn into cavities for birds. Eastern Bluebirds for example, are known in bird vernacular as a cavity nester. Yes, they still build a nest, but only do so in either an old fence post, a nest box or an old hole in a tree. (Robins or blue jays for example, build a cup-like nest right in between branches of a tree or on the crotch of the trunk.)

One dead tree can function as a nesting spot condo. The children’s book by Barbara Brenner, One Small Place in a Tree, describes the natural process of how many creatures can rely on a tree.

Did you know that a dead tree is a nursery for more than eighty birds in North America? Cavity-nesters include 10 species of owls, 7 ducks, 2 falcons, all 21 woodpeckers, and about 40 songbirds. *https://cavityconservation.com/value-of-dead-trees-2/

These two Great Horned Owl babies grew up not far from my home, and this dead tree served as their nursery where they learned to hunt under the watchful eye of their parent with exquisite camouflage until their full feathers came in.

We had a tree that was in need of coming down due to the Emerald Ash Borer, and just as it had for other trees in our yard, we knew the day would come. At the brilliant suggestion of our landscape architect, David Hughes of Weatherwood Design, we took down the tree, but not all the way down. It now stands as a snag. Varying heights of around 8 to 12 feet were left intentionally.

At first glance it may appear as if our arborists’ equipment petered out and the job was left undone. But that is not the case at all. It was all done with intention. Letting the tree serve out another purpose past its original use as a shade tree. (The tops are cut on an angle so that moisture on the tree does not accumulate.)

Over time, woodpeckers will frequent, and the tree can live out its secondary purpose as a habitat tree. In fact, the Pileated Woodpecker photographed at the beginning of this post, is on said tree. Before it was made into a habitat tree.

We also added a native plant to the base of the tree, a vine in the grape family. Virginia creeper (Parthenocissus quincquefolia), is extremely beneficial to wildlife. Many birds eat the berries in the fall, and a variety of other creatures feed on the stems and leaves. Including chipmunks!

For now, we have the perfect perch. So many birds land on it. It’s like a lookout tower. The Virginia creeper is still small, but it is growing steadily up the tree!

Please refer to the Cavity Conservation website to learn more about how to safely preserve a tree. They have a wonderful (and aptly named) decision tree to determine if a tree you have on your property should come all the way down, or if it is safe to leave as a habitat tree. It can be found on the Resources page, under Wildlife Habitat Tree Decision Model.

Leaving a snag, when done safely, is another perfect example of HABITAT. Or as I like to call it: Horticulture And Biodiversity Inter-twining And Thriving. Click the link to see a slide show of other improvements we have made to our property including meadows and a rain garden.