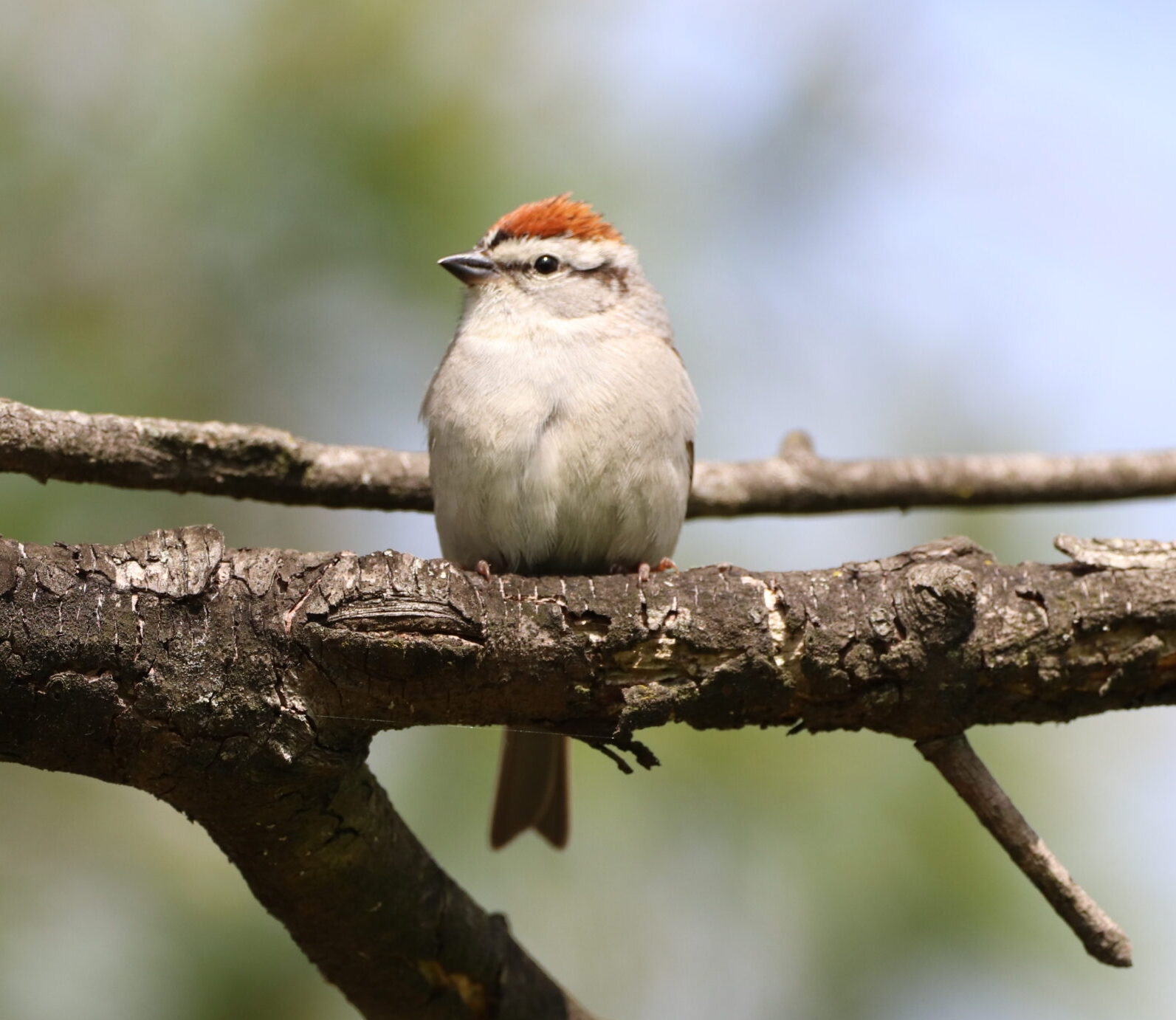 Knowing your sparrows is a challenging feat, but with time and noting some very unique features, it does come easier. And an added boost if you can hear their song. Early one February morning, I was hoping to get some photographs of various types of Sparrows that mostly look alike.

You can tell many birds apart based on their movements, flight patterns, where and how they feed, and the overall silhouette of their body. Giss is birding vernacular for General Impression of Size and Shape. For example, relying on giss when watching birds helps you decipher a bird. Like picking your car out of a parking lot…you know you are hunting for a sloped hatchback in blue with a yellow plate, not an upright SUV in red with white plates. Once you start watching birds and learning their personalities, giss sort of comes naturally. There is a theory that it comes from the World War II RAF acronym GISS for “General Impression of Size and Shape (of an aircraft). See: https://en.wikipedia.org/wiki/Jizz_(birding)#cite_note-11

Using giss, you can easily figure out you are looking at a White-Breasted Nuthatch from a distance. One of the only birds capable of going down a tree head first. (Assuming you’re bird watching in the Eastern United States). But it could be an American Treecreeper or even a Red-breasted Nuthatch too. You will need to rely on size and color to make a full positive ID.

But with sparrows, you are unable to use your giss as you could for telling apart a Blue Jay from a Belted Kingfisher for example. These similar blueish-gray birds with white accents have different habitats. Kingfishers are usually found alone somewhere near a body of running water, unlike the gregarious Blue Jay who is usually found in social groups caching nuts and being obnoxious.

The more you get to know a Blue Jay though, you realize their obnoxious behavior is actually their street smarts; they are busy hiding seeds and food and alerting the whole word to predators. Or even imitating said predator to get the food all to themselves. Have you ever heard a Blue Jay imitate the sound of a Red-tailed Hawk? It is spot on.

Sparrows are much more difficult to decipher unless you really dig deep because they have so many similarities…minute similarities. Thankfully, they sit still more than most song birds.

Differences in Supercilium and White Tipped Coverts? There’s an App for That!

Some sparrows looking ever so much the same it is enough to make you nuts! Except for maybe one little steak over the eyebrow (supercilium), black legs or pink legs, or one small rust patch on their crown or nape, or the small white tips of the base of the wings (coverts) telling one sparrow from another is like understanding the coffee menu at Starbucks. Iced vente skinny macchiato sounds less like a coffee and more like a jumble of silly words. Just like a Starbucks signature drink can have small changes to their froth, shots, milks and steam, rendering them completely different, a Field Sparrow and an American Tree Sparrow are very similar but yet different! Yet I still set out with the goal of capturing so many differences on camera. (The bird at the top of this post is a Chipping Sparrow.)

Did you know there is a free App you can download called Merlin? It will help you ID a bird on the spot. Whether you saw the bird on your front steps, or on a walk along the beach, this App is amazing!! It is from the Cornell Lab or Ornithology and it is incredibly accurate. Once you have the App, it will ask a few simple questions like: what size was the bird, what were the main colors of the bird, was the bird eating from a feeder, swimming or wading, on the ground, in trees or bushes, on a fence or wire, or soaring or flying? It then gives you a possible amount of matches for you to pick from based upon your location and date.

Half Caff, No Whip, What?

The language of Starbucks was clearly in need of a giss system, so most people resort to ordering their cup of daily joe from the Starbucks App. It is so much easier, takes the guess work out of ordering your favorite and completely customizable! And when it is not Pumpkin Spice Latte season, there are endless choices to make for a daily dose of Starbucks. Yes, something like one quarter of the sales for Starbucks come orders from their App. Otherwise, the trip to Starbucks might go like this:

The person who goes into Starbucks for the first time, it would be like saying….

“Could a have a coffee please?” The barista giving a response with a bit of dumbfounded look on their face, with the retort:

“You don’t want any foam or frapp with that, no soy or oat, half caff, anything?”

“Well, we sort of don’t really have that here.”

That is exactly how I feel when I go to ID the sparrow I am looking at!  White tip coverts, no supercilium, half eye ring, chestnut cap, unusually long tail. Just give me a sparrow!!!!! And I am still never sure I got it right! I need Merlin, clearly.

A White-Throated Sparrow and a Song Sparrow are more easily recognizable with their distinguishing features. Note the yellow patch above the beak, including the white throat on the White-throated Sparrow, or the prominent brown chest spot on the Song Sparrow. (Side note: In summer, the Song Sparrow is easy to ID. They are most often seen singing their heads off in the last light of summer evenings from the tops of trees.)

As I was trying to capture said sparrows, not to mention using the Merlin app to ID what the heck I was photographing, (the pictures above were actually captured on multiple different days, not the day I actually set out to do it ), a Red-tailed Hawk caught my attention. Then, something even more impressive. A Bald Eagle.

As if trying to capture different sparrows wasn’t difficult enough, I now had to focus my efforts on a flying eagle riding thermals without falling off my deck with camera in hand. I was successful, with the eagle that is. All told, this bird was above my house for no more than 5 minutes, but that was all I needed. No app needed to positively ID this bird.

After seeing the Bald Eagle fly over my backyard, I had to give up on the sparrows.  Their time will come, but for now, the day belonged to this Grande Latte Macchiato. With its steamed milk both above and below shots of espresso, Looks like a Bald Eagle to me!

Side note, Bald Eagles take over 4 years to reach their full white head and tail. Prior to that, their giss is also challenging. They don’t have the white head or tail at all, and the underside of their wings look like moose tracks ice cream, but the sheer length and straightness of their wings are unmistakable. Plus, you get this feeling that you in the presence of greatness. Use the app, it helps, I promise!

Answer three simple questions about a bird you are trying to identify and Merlin will give you a list of possible matches. Merlin offers quick identification help for all levels of bird watchers to help you learn about the birds across the Americas, Europe, Asia, Africa, and Oceania.

There is also SOUND ID too which is extremely useful, assuming you are close enough for the App to actually hear the bird sound in question. I use it all the time.

One thought on “The Starbucks Sparrow”

The Housing Market is Hot!