What Has Wings of a Fairy, 6 Legs, and a Lobster Tail?

If you have spent any time around native plants, chances are you have seen this gorgeous (yet unusual) creature, a Clearwing Hummingbird Moth, (Hemaris thysbe). A day-flying moth they are delight to watch as they hover and and even “humm” just like a diminutive hummingbird. They are a unique looking flying creature that sparks everyone’s imaginations. They can fly much like a hummingbird, but are not attracted to the color red. You may also hear them referred to as hawk moths. Yet, with wings of a fairy, 6 legs and a lobster tail you might think it’s a really funny Halloween costume.

After admiring their beauty though, the thought “Where does such a creature come from?” rarely comes to mind. If you like putting off your “to do” list this fall and you need another reason to skip doing the leaves, then consider this: you are taking away a creature’s home when you clean up around fall. And right now, you are thinking…what on earth does a caterpillar that turns into a day-flying moth have to do with raking (or blowing leaves) in the fall?

It wasn’t until this past summer that I noticed a ton of fras (that’s the fancy word for caterpillar poop) on my deck just underneath our blooming Coral Honeysuckle (Lonicera sempervirens). I was curious and wanted to investigate what was causing such a pile on the deck.

After some searching under over and around about 20 different leaves, there it was, a lime green creature about an inch and a half long with a spiky black horn on one end. After using iNaturalist, I was delighted to discover that the caterpillar was using my Lonisera spp as a host plant, exactly what it is supposed to do. (This is one of several host plants they use.) There was a small section of several chewed leaves in a row. Come spring, we should have the next gen of hummingbird moths, as the caterpillar pupates in a thin cocoon in the leaf litter. If that is not reason enough to leave the leaves…the leaf litter will be his (or her) home for the winter months on the ground.

The following excerpt is from the US Forest Service website:

The females entice the males with an aroma or pheromone that they produce from glands at the tip of the abdomen. After mating, they lay their tiny, round, green eggs on their larval food plants, usually on the underside of the leaves. The caterpillars have a horn at the rear end and are commonly green, well camouflaged among the leaves. When they are fully-grown they drop to the ground, spin a loose cocoon and pupate, partially protected by leaf litter. That leaf litter so hated by some gardeners provides a shelter to this beautiful pollinator. In the north, where the season is short there is only one generation per year; the pupa spends the whole winter well hidden and the adult does not emerge until the next spring. In the south, there is usually more than one generation each summer.

This adorable creature, which I have heard referred to as a “bumblebird” is only one of many creatures that call leaf litter their home in the colder months.

So if you need an excuse to drop the rake and put away the blower, there it is: let nature be and “leaf” it alone!

There is wonderful free downloadable publication from the American Museum of Natural History called A Seasonal Guide to New York City’s Invertebrates. Check it out! It is a 23 page document highlighting the invertebrates in and around New York City. It gives a month to month guide of what to look for and what you might see. So many things overwinter in or near the ground that you would never think of. The document is full of fun facts!

It is also wonderful news to hear that some areas are actually banning the use of gas-powered leaf blowers. Amen! In the Bay Area of California, gasoline-powered leaf blowers have been banned in Berkeley, Belvedere, Mill Valley, Sonoma, Los Gatos and Los Altos and their use restricted in Tiburon, Palo Alto and Orinda, California. Now while this ban is more focused on reducing emissions, it is also helpful to get the word out even further about leaving the leaves alone and what creatures it benefits.

If you must do your leaves, at least follow the rules and do it right. Leaves left in the street are no good. During storms, they will run down into the storm drains. Those drains are for water, not leaves. Please consult the rules in the town in which you live and if you must rake or blow, at least do it right. You could also consider composting them too!

While Coral Honeysuckle does grow along roadsides and thickets, we have ours growing between our spindles of our deck. 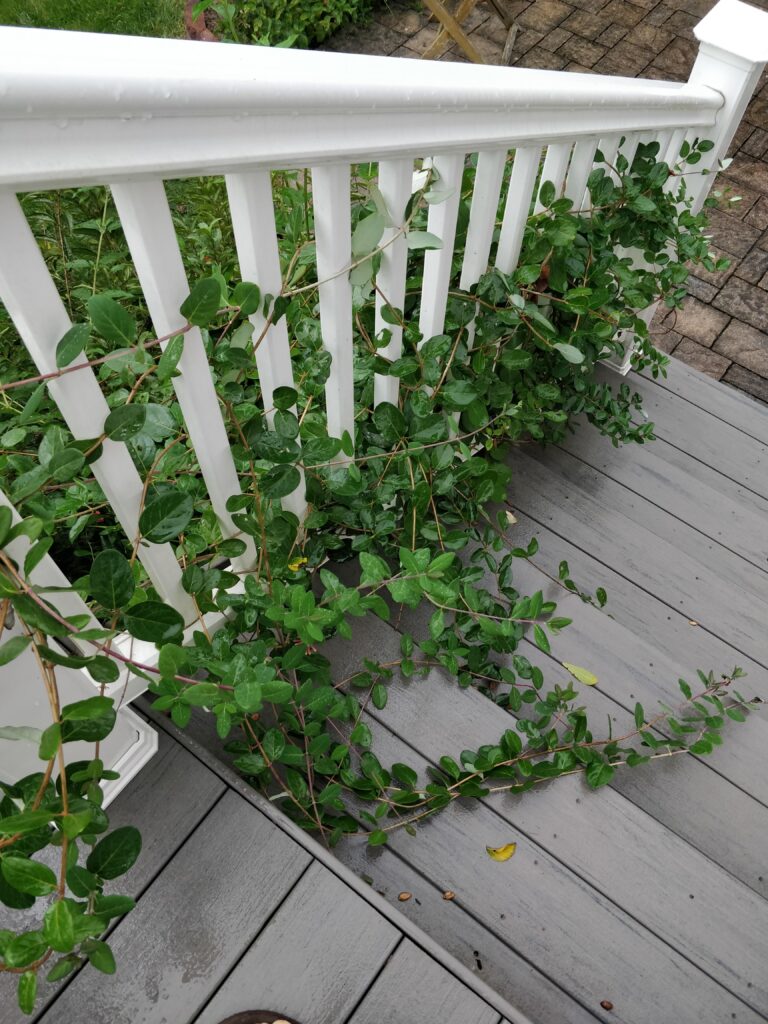 And one last parting fast fact about this loveable insect: Its proboscis (fancy word for tongue) is about double the length of the moth’s body! Really, why aren’t they a Halloween costume??

The Cycle of Life, A Butterfly’s Perspective