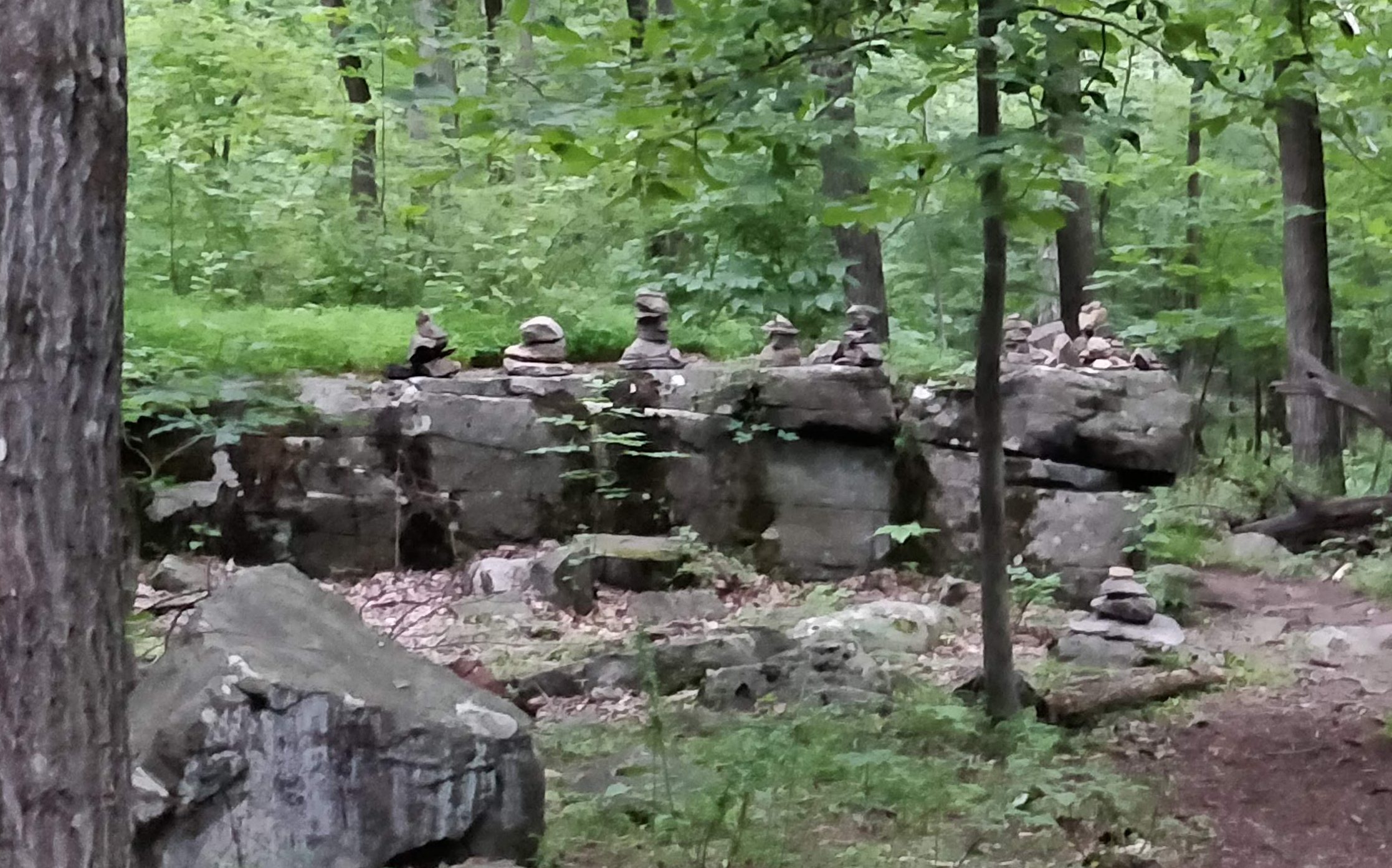 A few weeks ago my inbox dinged with the prospect of a Sourland Mountain hike hosted by Athleta. No stranger to the mountain and all its boulders, having grown up in the Montgomery area, I was excited to see that the hike was a sunset one. Able to leave my daughter with daddy on a “date night” I was immediately responding “yes” to the Athleta team that I would be there.

The Sourlands are a unique area. A giant swath of land that stretches across central New Jersey like a giant band-aid. It is a very necessary piece of land for migratory birds coming from Central and South America heading north. Completely unsuitable for farming which is possibly how the land earned its sour name, it is all the while perfectly suitable for hiking, birding, and restoring power and flow in a summer’s sunset hike. Which is exactly what I was there to do.

Driving into the parking lot on the edge of Hillsborough Township, I was reminded at just how big of an area the Sourland Region is. (The namesake is both a region and a high point mountain as well as this particular preserve.) Seeing a number of ladies gathered by the edge of the lot and having heard the words: “The power of she” I knew I was in the right place. We made some small introductions and began the hike with the sharp gravel still beneath our feet…the sun retreating behind the forest…and lowering the overall temp by a welcome degree or two and began to talk about empowerment.

What does it mean? How do we use it? What words can you even spell with the letters in it? As it turns out, men, women, and more importantly…ME. Our group of hikers was led by Brighde Dougherty, founder of FLOW. She helps her clients develop a plan for self-empowerment using sports and nature to unlock their inherent mind, body, spirit connection. We would later learn that she indeed has quite a strength in nature, as we caused thunder to rumble during the mid-way point of our mountain trek directly after a very powerful session led by her thoughtful, well-intended words.

Now, back to the beginning…we had not even left the parking lot, and I was already in tune with feeling, hearing, seeing, touching and just taking in the senses around me thanks to her guidance. She had us gather our thoughts and inner feelings. Leaving the crazies of the day behind us. She talked about reaching from point A to point B by utilizing our “power” in between. There is a space between our response where we can choose to react positively, or there is a space where we can choose not to react positive. Only if we empower ourselves with the knowledge of what our strengths are can we truly empower ourselves and those around us as well. Her words ran as deep as the forest we were about to enter.

As we began our 2-mile+ and over 500-foot or more climb up the Sourland Mountain Preserve, we walked in silence. We walked, but honed our listening, our feeling, our seeing, and our smelling senses as we traversed the climb. I was trying to focus on the sound of one Eastern Phoebe bird I heard singing away near the parking lot. Yet, as we started into the forest, her song was lost and I was hearing other things instead. Still walking in silence, I was struck by the shear awesomeness of the mountain. Boulders everywhere, I stole a glance to my left and saw a white tailed deer…standing just as silent as I was walking. A bit further along the trail, I noticed the medicinal plant black cohosh growing happily in several spots.

While our steady incline continued to grow, the drop in temperature was equally growing and I began to wonder why I packed my sunglasses and a hat. The towering tulip poplar trees were as present as the boulders themselves. I noticed a few of their very unique shaped leaves dotting the trail floor. Simple beauty in bright yellow prematurely falling in summer. A towering tall tree, the straightest in the forest, with no wayward outward branches except the ones reaching out from the canopy, they stand as a stark contrast to the mismatched, no-rhyme-or-reason diabase boulders that jut out from every area, a mere remnant from the Jurassic period.

Finally reaching the top of the mountain, we took some time to go back into our state of silence and absorb the beauty of the forest around us. Each of us able to claim our own semi-flat surface of giant rock to sit on. We were surrounded by not only each other (though we all seemed so distant from one another) but also by dozens and dozens of teetering rock towers. Each delicately constructed by human hands either a day ago or a year ago. Even though we were the only ones on the mountain, the mountain had a story to tell. One that was millions of years old, and the one that was just told today. While I didn’t construct my own tower on this hike, I did finally hear my bird again. The Eastern Phoebe was up there…somewhere…and so was I.

But as they say, what goes up, must come down, and so must the solstice hike. Our leader brought us back from our empowered intention and we opened our eyes if they were closed, or put down our foot soles if they were up off the ground, or put back on our packs if they were beside us, and we regained our momentum. And quickly at that…as the thunder rumbled clear as a drum roll right above our heads. We bee-lined it down the C-trail as quickly as we could only making one wrong turn in our haste requiring a quick backtrack. Thunder rumbled several more times, yet oddly, we once in a while caught a glimpse our shadow on the trails’ path through our precisely calculated downward steps. The rain indeed held off until we reached the parking lot about a quarter of an hour later. It actually takes much longer for the rain to hit you in a forest. A few times we actually wondered: “is it raining at all? Or are the leaves just rustling around?” And while we didn’t get a chance to regroup and do a sunset yoga by the lake at the end of our C-trail circumnavigation…a rainbow that followed me the whole way home from Hillsborough to my backyard was full circle ending to a summer solstice evening. 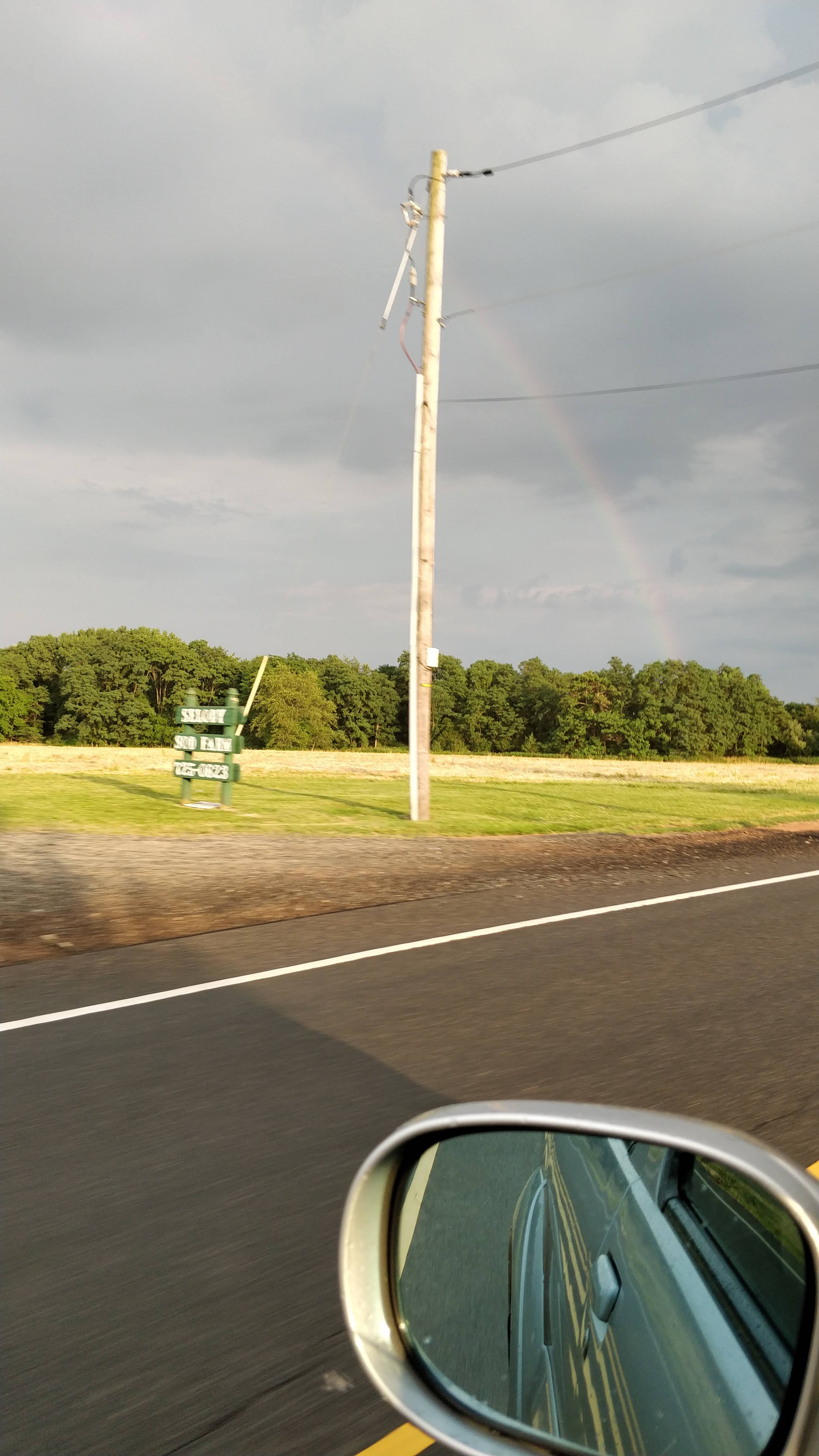